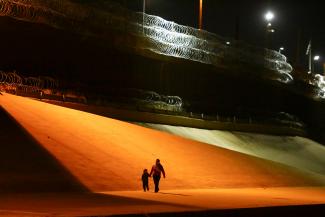 The COVID-19 pandemic created adverse socioeconomic and political problems for Mexico. The framework of global health diplomacy (GHD) provides a way to understand how Mexico responded to the pandemic and seeks to improve its participation in global health. GHD merges the study of foreign affairs and public health and analyzes how governmental and civil society stakeholders with different backgrounds and political influence approach transnational health issues and exercise power, engage in governance, and seek to sustain or change global health policies. For Mexico, the pandemic created major challenges for its relationship with the United States. In this context, Mexico must change how it conducts health diplomacy.

Mexico’s most significant involvement with GHD processes has emerged from the health issues that arise along its border with the United States. This border is one of the longest in the world, stretching more than 2000 miles (3218 kilometers), touching four U.S. and six Mexican states, and creating a unique geographical region extending 62.5 miles (100 kilometers) on each side of the international boundary. Approximately 15 million people live in this region, a population that is expected to double by 2025.

From an epidemiological perspective, the U.S.-Mexico border population is a single unit, rather than two different populations separated by a border

Many factors have contributed to population growth in the border region, but the economic opportunities created by the adoption of the North American Free Trade Agreement (NAFTA) in 1994 have been the most important. Currently, around 3300 maquiladoras—U.S.-owned factories in Mexico that export products to the United States—operate near the border and employ more than one million workers. The proliferation of these factories has stimulated growing numbers of people from other regions of Mexico and Central America to move north toward the U.S. border. The increased economic activities and the population growth converge with historical and social patterns to make the border one of the most porous in the world. Pre-COVID, thousands of people crossed daily for work, shopping, school, medical care, and visits to family and friends.

From an epidemiologic perspective, the U.S.-Mexico border population is a single unit, rather than two different populations separated by a border. As is well known, infectious diseases do not recognize geographical boundaries. Cross-border movement of people and animals contributes to the transmission of various diseases, including hepatitis A, human and bovine tuberculosis, shigellosis, syphilis, and brucellosis.

In the wake of NAFTA and as emerging infectious diseases became a more serious problem, Mexico and the United States recognized the epidemiological realities and created the Border Infectious Disease Surveillance (BIDS) project in 1997. This step contributed to the realization that the two countries needed to address more comprehensively public health and health care within the border region. In 2000, the Secretariat of Health of Mexico and the U.S. Department of Health and Human Services created the U.S.-Mexico Border Health Commission (BHC) to provide international leadership in improving health and quality of life along the border. The BHC has 26 members, including public health officials and professionals from the 10 U.S. and Mexican border states, top health officials from both federal governments, and—in the case of Mexico—representatives from state-level secretariats of health.

Despite this effort at health diplomacy, political, professional, legal, administrative, and cultural barriers to effective cooperation existed before COVID-19 emerged. U.S. and Mexican policymakers have not made cooperative resolution of health problems at the border a priority. Instead, the presidential offices and foreign affairs departments of both countries have largely pursued national approaches to solve transnational health issues arising across the border region.

The Border Region, COVID-19, and the Securitization of Health

Mexico's handling of the COVID-19 pandemic has been controversial because of the high morbidity and mortality rates in the general population and the devastation the public health and health-care workforces have suffered. From the start of the pandemic, Mexican health authorities delegated their powers to government officials outside the health sector, downplaying, for example, the role of the General Health Council, a high-level government body. Consequently, preventive measures, such as the use of masks and social distancing, were not rigorously used, which produced a critical health situation across Mexico by January 2021. The Secretariats of Foreign Affairs and of Welfare, the National Guard, the Army, and the political party currently in charge (MORENA) all directly intervened during the initial stages of the mass vaccination campaign in early 2021. These interventions made the campaign opaque, slowed it down, politicized the pandemic within Mexico, and lead to the securitization of health policy.

In this context, in early June 2021, U.S. Vice President Kamala Harris visited Mexico on behalf of President Joe Biden to discuss the migration crisis at the border. As part of this visit, Mexican President Andrés Manuel López Obrador announced a donation of 1.3 million doses of the one-shot Johnson & Johnson COVID-19 vaccine from the U.S. government to be administered to residents in Mexican cities bordering the United States. With the United States treating the migration crisis and the pandemic as matters of national security, this donation was apparently intended to protect the U.S. population on the border from COVID-19 circulating in Mexico.

From the start of the pandemic, Mexican health authorities delegated their powers to government officials outside the health sector

Putting the Binational Back into Border Health

bilateral cooperation on border health and increasingly treated public health problems as national security threats. These nationalistic patterns do not provide effective ways for Mexico and the United States to improve border health while preparing for future pandemics. The need for robust cross-border economic activities, the worsening migration crisis, and the threat of disease outbreaks underscore why these neighboring countries should transform their diplomatic efforts on border health. The BHC must be revitalized to permit its capacity and understanding of transborder health challenges to support new strategies and novel collaborative mechanisms to address the expanding range of border health issues, including pandemic preparedness. A start in this direction can be made by having the BHC play a larger role in COVID-19 vaccination strategies on both sides of the border.

Certainly, pandemics raise national security concerns, but securitizing health narrowly and nationalistically is not the optimal strategy for addressing health issues arising in the complex socioeconomic contexts that exist across the border between Mexico and the United States. In this region, making progress on health requires taking advantage of the knowledge of the BHC and other binational institutions with expertise on the cross-border movement of health challenges, goods, services, and migrants. Progress on border health also needs to address the human rights violations that economic, disease, and migration crises produce.

EDITOR'S NOTE: The authors acknowledge the valuable support of Arne Ruckert and Ronald Labonte of the University of Ottawa in the development of this article.

The content of this contribution is solely the responsibility of the authors and does not necessarily represent the official views of the INSP, UNAM or the University Ottawa.

Germán Guerra is affiliated with the National Institute of Public Health, in Mexico.


Emanuel Orozco Nuñez is affiliated with the National Institute of Public Health, in Mexico.


Frida Romay is affiliated with the Institute of Legal Research of the National Autonomus University of Mexico.


V. Nelly Salgado de Snyder is affiliated with the National Institute of Public Health, in Mexico.