Go to homepage
The Life of a Foreign Aid Practitioner
Migration 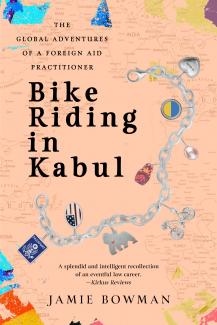 If you've ever wondered what the day-to-day life of a foreign aid consultant working across low- and middle-income countries could look like, Jamie Bowman paints an excellent picture. Bowman, a California native and legal consultant, recounts her experiences working across Asia, Africa, and Europe for various U.S. agencies.

Beginning her novel in Southern Sudan in 2006, Bowman plunges into the thick of the action by describing a missile attack outside of her tent, in Juba. She juxtaposes the relative tranquility of the day—there were no birds chirping, no air conditioning humming, no coffee machine, and nobody to talk to—with the "BANG. BANG. BANG." of successive explosives detonated close by. Using humor as a coping mechanism, Bowman responds nonchalantly to the attack, joking with Alex, "an easily annoyed UN intel officer," that they hope the strikes won't disrupt evening church services.

Keeping the same unfazed attitude characteristic of her personality and writing, Bowman goes on to describe her discontent with the situation in Sudan. Prior to the missile attack, Bowman was evacuated to a village in the north, contracted malaria, and was living in a sparsely appointed tent—a situation her previous experiences had prepared her for. An experienced foreign aid practitioner, Bowman notes that her previous stints in Kosovo, Ukraine, Bangladesh, and Afghanistan prepared her for life in "difficult places."

But Bowman isn't all business all the time. Alongside her stories of work and travel, she weaves in her relationship with her boyfriend, Roberto, who, she explains "had insisted that she take the job in Southern Sudan, so that they could be together, only for him to opt for a stint in Dubai."

From the Tropics to the Taliban

After catching the reader's attention with her opening vignette in Southern Sudan, Bowman outlines her career, noting that she went "from the tropics to the Taliban in six short years." She recounts one of her earliest postings in Pristina, Kosovo, in 2002, and discusses how she was relatively green to the foreign aid sphere when she took the job with USAID (she had previously completed an eighteen-month stint in Pohnpei, Micronesia). Her experience in Kosovo gave her a "front row seat to how the United States provided financial and technical support in a post conflict country," she says.

Highlights from her experience in Kosovo include a discussion with a colleague from Poland who, as a child in Warsaw, received a USAID CARE package containing salted butter. The colleague explains that butter is something "Polish people don't eat," and it called attention to the cultural insensitivity of the United States when delivering these CARE packages. The interaction, while seemingly petty, taught Bowman a valuable lesson that if the United States was going to be effective in rebuilding Kosovo—or any post-conflict zone—and in providing aid, it needed to be prepared to support the right reforms and take other places' cultures into account.

From Kosovo, Bowman moved to Ukraine—still working for USAID on a joint-partnership program with the World Bank, co-sponsoring new mortgage laws—and then to Bangladesh, where she worked for a project on "moveable property" with the Asian Development Bank. Eventually, she transferred to Russia where she worked for the World Bank. Her time across these countries seems peppered with invaluable experiences that taught her how to adapt to different cultures, think quickly, and work under pressure. Bowman received a crash course in post-Soviet Europe in Ukraine, familiarized herself with Islamic culture in Bangladesh, and managed to navigate her way out of jail in Russia.

The book's title is inspired by a stint in 2005, when Bowman and her boyfriend moved to Kabul, Afghanistan, where she found solace in weekend bicycle rides. But her adventures did not stop there. After leaving Afghanistan, Bowman continued to circumnavigate the globe going to Southern Sudan, Rwanda, and Afghanistan again, before wrapping up her story in France. There, she reflects on her years of work for the United States and how her experiences shaped her understanding of America's role in the world. Bowman notes that despite the United States’ flaws (e.g., sending salted butter in CARE packages to Poland, or trying to instill democracy in Afghanistan), she still loves her country and is motivated to make others feel the same way. It's Bowman’s patriotism and drive for adventure that spurred her career as an international aid consultant.

While her descriptions of legal work might not capture all audiences, Bowman’s novel is surely able to keep most readers engaged. Between her David Sedaris-esque vignettes of being a Western woman working in Muslim countries, her heart-wrenching stories of love, and her reflections on working for the United States, Bowman has a topic for every reader. So, next time you find yourself on a flight with time to spare, on a tropical beach, or even in a post-conflict zone, grab a copy of Bike Riding in Kabul and start reading.

The Afghanistan Disaster and U.S. Foreign Policy on Global Health

The Taliban's triumph has terrible implications for past, present, and future U.S. foreign policy on global health