The Afghanistan Disaster and U.S. Foreign Policy on Global Health

The Taliban's triumph has terrible implications for past, present, and future U.S. foreign policy on global health 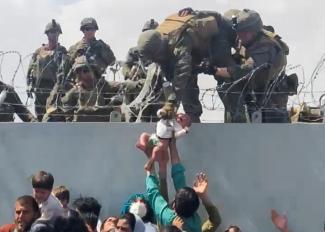 A baby is handed up to the U.S. Army over a perimeter wall at the airport in Kabul, Afghanistan, on August 19, 2021, as Afghan civilians and others evacuate. OMAR HAIDARI/via REUTERS/File Photo
by David P. Fidler August 20, 2021

The Afghan police officer in charge of the jail was juggling calls on three mobile phones, making representatives from the U.S. government and their Afghan interpreter wait. The policeman finished a call, collected his phones, and began to leave, saying something to the interpreter, who told the delegation that the policeman would be right back. Minutes passed before a voice at the back of the room declared, "You're all dead now."

The Taliban now control what happens to public health, health services, and social determinants of health in Afghanistan

This training exercise in 2009 at a U.S. Department of Defense Training Center taught hard lessons as the U.S. government surged civilian and military personnel to engage in counterinsurgency in Afghanistan. The interpreter did not listen to the policeman during his phone calls, during which he provided information to Taliban fighters converging on the jail. Nearly a decade after the U.S. invasion, the Taliban was not defeated, remained a relentless enemy, and constantly turned Afghan police and security forces against the government. Despite the difficulty, the training was premised on the belief that the Afghan government—backed by the United States and its NATO allies—would defeat the insurgency by creating a democracy that respected the rule of law, protected human rights, supported a prosperous economy, and provided health and other essential services. All those objectives are now dead.

The Taliban's takeover has the U.S. government reeling, and policymakers and pundits are deciphering what this disaster means for Afghanistan, the United States, and global politics. The Taliban now control what happens to public health, health services, and social determinants of health in Afghanistan—a harrowing reality for the Afghan people. For the United States, the Afghan government's collapse destroyed a nation-building project in which health was important in the strategy designed to defeat the insurgents. The project's ignominious end threatens to haunt U.S. foreign policy on global health. President Joe Biden's approach to global health emphasizes U.S. leadership, democracy's capabilities, the rule of law, and human rights—just as the U.S. government did in Afghanistan. With the Taliban's flag flying over Kabul, the credibility of U.S. foreign policy on global health has suffered a serious blow.

The grim future for Afghan health flows from the failure of the U.S.-led counterinsurgency campaign

The grim future for Afghan health flows from the failure of the U.S.-led counterinsurgency campaign. In counterinsurgency strategy, providing physical security and essential services, including public health and health care, are interdependent objectives, an approach that connects to broader policy discourse about the relationship between health and security. Better security and improved health demonstrate a government's capabilities and turn the population against the insurgents. As the U.S. Counterinsurgency Field Manual (2006) explained, "Victory is achieved when the populace consents to the government's legitimacy."

However, the counterinsurgent coalition never improved security sufficiently to make efforts on health matter in the conflict. Indeed, the Taliban attacked health facilities to demonstrate the population's insecurity and damage the counterinsurgency's attempt to win "hearts and minds" through health services. Without security, health improvements were chimerical—they were limited, vulnerable to insurgent violence, and did not persuade the population that the Afghan government was capable or legitimate. The "blood and treasure" spent on security and essential services created an Afghan government so dependent on, and corrupted by, foreign assistance that even U.S. leaders questioned the government's legitimacy and the counterinsurgency effort well before President Biden withdrew remaining U.S. military forces.

The Taliban's return threatens the health services, outcomes, and efforts for women produced when the United States was the indispensable ally of the Afghan government. This health tragedy will last a long time. The Taliban faces no serious opposition; and future health assistance from donor countries, international institutions, and non-governmental organizations will be controversial, smaller, heavily conditioned, fragmented, and riddled with interference from the Taliban government.

U.S. involvement in Afghanistan was never about global health, so caution is needed in connecting failure there with U.S. foreign policy on global health. Even so, what has transpired in Afghanistan after twenty years of U.S. effort has implications for U.S. foreign policy on global health. In responding to the COVID-19 pandemic, President Biden has emphasized the need to reassert U.S. global leadership, demonstrate that democracies can handle twenty-first century threats, operate within a rules-based international order, and protect human rights, particularly women's rights. Improving global health serves the strategic purposes of advancing U.S. power, influence, interests, and ideology.

The debacle unfolding in Afghanistan provides scant evidence of U.S. global leadership, the competence of democracies, respect for a rules-based international order, and the protection of human rights. The similarities between the purposes of U.S. foreign policy on global health and the U.S.-led counterinsurgency campaign's objectives in Afghanistan make comparing the two contexts valid and necessary. The gap between President Biden's cold, narrow justification for leaving Afghanistan and his administration's rhetoric on global health is unsettling, hard to explain, and ripe for adversaries to accuse the United States of incorrigible hypocrisy.

The post-Cold War period witnessed terrorism, infectious diseases, and climate change emerge as prominent, non-traditional security threats. With the Taliban victorious, fears about global terrorism are skyrocketing, just as the United States struggles with a pandemic for which it was unprepared and confronts a climate-change threat that it did not take seriously for decades. This confluence of threats raises additional questions about U.S. credibility and capabilities. It suggests that the United States squandered the post-Cold War era by failing to address effectively the threats that terrorism, pathogens, and climate change pose to Americans. While locked in competition with China and Russia and politically divided at home, how is the United States going to simultaneously develop and implement effective counterterrorism, pandemic, and climate change policies?

In the crush of challenges that the U.S. government faces in the wake of the Afghan catastrophe, what foreign-policy attention global health will receive is not clear. As Greg Jaffe observed in the Washington Post, the post-Afghanistan shakeout might produce more focus on pandemics and climate change, but "it seems unlikely that these threats will take center stage in U.S. foreign policy" with the U.S. government fixating on geopolitical rivals, responding to the aftershocks of the Taliban's takeover, and preparing for a resurgence of terrorism.

From Saigon to Beyond Kabul

The evacuation of U.S. diplomats from Kabul has produced images likened to the pictures of the humiliating withdrawal from Saigon in 1975. U.S. foreign policy experienced dark days after South Vietnam fell. The fall of Afghanistan will also create foreign policy problems for years to come. In terms of foreign policy on global health, the undignified end to America's longest war could not have come at a worse moment, with the COVID-19 pandemic still raging at home and abroad and the dangerous consequences of climate change manifesting themselves around the world.

Yet, within 15 years of Saigon's evacuation, the Berlin Wall fell and the Cold War ended—a reminder that, despite shocking defeats, the prospects for what the United States can do with its power and principles are never dead. Reckoning with, and recovering from, the Afghanistan disaster will be a "whole-of-foreign-policy" responsibility for the United States. Not all the lessons learned will affect foreign policy on global health, but the United States has the obligation and opportunity in global health to realign its power and principles in ways that history might one day record as transformational rather than tragic.