Go to homepage
How Does China's Pollution Control Shed Light on Its Pathogen Control?
Environment

How Does China's Pollution Control Shed Light on Its Pathogen Control?

The zealous pursuit of pollution or pathogen control is built into a top-down, state dominated policy structure 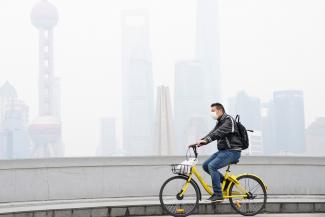 A man wearing a face mask rides a bicycle on a bridge in front of the financial district of Pudong covered in smog during a polluted day in Shanghai, China on November 22, 2017. REUTERS/Aly Song
by Yanzhong Huang January 28, 2021

As in many other countries, policy shifts in China are typically driven by crisis. When changing circumstances threaten core domestic values or highlight failures of existing policy, it galvanizes political commitment for decisive action.

In 2013 when levels of air pollution reached dire levels (popularly dubbed "airpocalypse"), it led to a flurry of new policies, promises, and programs for pollution control. Similarly, in late January 2020 once President Xi Jinping recognized the existential threat posed by the novel coronavirus, he ordered the lockdown of Wuhan and soon extended it to other parts of China.

Xi's concentration of political power since 2012 has facilitated enforcement of new policies in both these and other areas, by giving rise to a bandwagon polity in which underlings compete to support his favored policy agenda. For example, when Hebei province announced a plan to convert 1.8 million homes to clean energy by the end of October 2017, the implementation went so well that more than 2.5 million homes switched to gas or electricity by the deadline.

That bandwagon effect is clearly present in China's crusade against the COVID-19 outbreak in Wuhan. After Xi ordered "all-out efforts" to curb spread of the virus, the city managed to build two new hospitals from the ground up in just a few days, each with the capacity to treat 1,000 severe cases, and an additional 16 makeshift hospitals that could house a total of more than 12,000 patients. When Xi clearly signals his policy priorities and his commitment to a specific policy agenda, brazen disobedience or foot-dragging appears to be rare.

The zealous control of pollution or pathogens comes naturally to a top-down, state dominated society. The Chinese government does not typically seek input from the citizenry before launching new policies, viewing society as something to be engineered and mobilized as pawns of the paternalist state. For example, when China kicked off a campaign to convert coal-burning heaters and stoves to cleaner fuel-burning systems, the rural people who would be impacted by this effort were not consulted.

Then an extensive array of Mao-era institutions–including local party branches, "work units", and street subdistrict offices—ensure that local government officials and the public align with the changes, sometimes drawing on big data and information technology to do so. When necessary, personnel and technologies may be deployed to improve accountability and coordination: in the 2017 campaign against pollution, the government dispatched up to 7,000 inspectors to northern China to monitor compliance with environmental laws. Drones and remote sensing make it increasingly easy to discover and discipline fraud.

Efforts to control COVID-19 have followed the same pattern. The government imposed lockdowns, instituted mass testing and quarantine measures on an unprepared population, and ensured compliance with these measures through a mix of traditional and high-tech means, enabling efficient detection and curtailment of the virus. In late December 2020, more than 1,000 public health officials raced to identify "Patient no. 1," who had started an outbreak that infected around a dozen people in the Shunyi district of Beijing — and identified the person in 140 hours. This exemplifies how government officials are on high alert, and local residents, fully aware that their actions are closely monitored, express support for the Orwellian approach.

This authoritarian approach has weaknesses. It tends to rely heavily on administrative fiat in lieu of public participation and market mechanisms, and increases the likelihood that policies will be implemented in heavy-handed ways. In November 2018, a district of Taiyuan, the capital of Shanxi province, was found to have imposed a blanket ban on burning coal in order to force local residents to adopt electric-powered heaters. Without access to coal, but unable to afford the new electric appliances, local residents tried to keep themselves warm by burning old furniture and discarded wood floors, producing clouds of smoke that only worsened pollution in the city. Just last month, in Xianyang, Shaanxi Province, local cadres reportedly used cement to stop up coal-heated brick beds villagers relied on to warm themselves during the winter.

In Gaocheng, 20,000 villagers were required to leave their hometowns to quarantine

Similar methods emerged in China's COVID-19 control. In October 2020, after the city of Qingdao recorded a dozen cases, the local government aggressively tested the city’s entire population of 11 million, but found no new cases. More recently, in Gaocheng district, Hebei province, 20,000 villagers were required to leave their hometowns to quarantine. Last week, national health authorities asked all who travel to the countryside for Lunar New Year celebrations to get tested prior to traveling and to undergo a fourteen-day quarantine on their return.  And in a move reminiscent of a system in nineteenth-century France under which police medics were permitted to inspect the bodies of women using a speculum to determine whether they had syphilis, China introduced an anal swab test as a new protocol to test for COVID-19 among those in quarantine.

Because high-powered, politically charged campaigns typically serve short-term goals, policies prove difficult to sustain. During the pollution control campaigns, because government inspection teams typically only stayed in a location for two weeks, that brief period did not afford sufficient time to observe fundamental changes in local bureaucrats’ behavior. In Tangshan city, Hebei province, when an inspection team returned to 39 places they had previously visited for a "looking back" visit, they found that none of the problems they had identified had been addressed. As the economy recovered after April 2020, local government officials have promoted economic growth to the detriment of environmental protection, threatening to further erode the past improvements in pollution control.

China's COVID-19 control may also prove unsustainable. Since March 2020, the government has not tolerated any new infections, and the identification of even a single case has triggered extensive and aggressive mass testing, contact tracing, quarantine, and lockdowns. But as sporadic, isolated outbreaks increasingly give way to clustered and community outbreaks in a growing number of places, including in the countryside where disease surveillance and response are weak, "resetting to zero cases" becomes increasingly costly. In the coming years it may generate more fatigue, a higher social cost, and greater economic and financial pain.

But the diminishing returns attributable to China's pollution and pathogen controls do not appear to have significantly undermined public trust in the government. China  is deft at "performative governance," defined by social scientist Iza Ding as "the theatrical deployment of language, symbols, and gestures to foster an impression of good governance among citizens." As a result, the popular narrative is that China is winning the war on pollution, even though the progress is uneven, the health benefits are limited and mixed, and the single-minded pursuit of pollution control has incurred unintended and undesirable outcomes on other policy fronts.

The popular narrative is that China is winning the war on pollution, even though the progress is uneven, and the health benefits are limited and mixed

Likewise, the country's control of COVID-19 has been touted for reining in spread of the virus, and used to promote public support of government actions. Indeed, the official narrative is so powerful that even some liberal-minded Chinese scholars buy into theories that discredit U.S. made vaccines or describe other countries as the origin points of the pandemic. This governance tool helps narrow the gap between public expectations and the state's actual capacity, and distinguishes China apart from the former Soviet Union in terms of its strength and resilience. Here again, a close look at China's environmental policy process unlocks important clues about China's response to COVID-19.