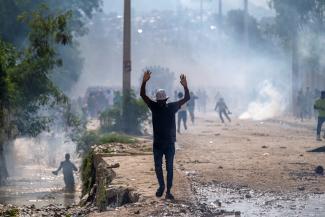 A man raises his hands after the Haitian National police deployed tear gas to disperse the crowd during a protest demanding the resignation of Prime Minister Ariel Henry, in Port-au-Prince, Haiti. REUTERS/Ricardo Arduengo
by David P. Fidler October 19, 2022

Once again, a crisis in Haiti has triggered calls for intervention by democracies and international institutions to address problems—government instability, violence, and poverty—that past interventions failed to mitigate and prevent. Those failures have caused hesitation about intervening, but the crisis cannot be resolved without intervention. This hesitation has allowed the crisis to cause more damage across Haiti and deepen its dependence on other countries, international bodies, and foreign non-governmental organizations. Such dependence undermines Haiti's prospects for building the political, economic, and social resiliency it needs as a democracy in a more divided, dangerous, and climate-disrupted world.

Health policy and advocacy does not escape this vortex. The collapse of civil order in Haiti threatens individual health, disrupts health services, and shatters the political, economic, and social determinants of health. Help from the global health community is required, but, as previous crises have demonstrated, gains achieved through such assistance are vulnerable to the volatility of the political system, the poverty produced by economic policies, and the fragility of social cohesion. However, the political, economic, and social resilience that health progress needs have repeatedly failed to materialize after foreign interventions in Haiti.

The seemingly endless cycle of political and health crises in Haiti highlights enduring policy problems related to the governance of health determinants and the failures of democracies concerning Haiti specifically, and global health generally.

Health and the Governance of Health Determinants

As an acute crisis, the situation in Haiti will mobilize humanitarian assistance and produce lessons for the health components of the assistance provided. However, past experiences in Haiti and elsewhere have shown that such health lessons do not drive the political and economic decisions that most directly affect health determinants. Such decisions are often impervious to input from the health sector because they set the overarching ideological and structural conditions for the exercise of political power across all policy domains. As a result, the voice of health is weak when the governance of health determinants is decided.

This pattern appears in the Montana Accord issued on August 30, 2021, by Haitian political organizations and civil society groups. The accord proposed a blueprint for transitioning the country toward public security, democratic governance, and self-determination against foreign powers. Health appears as one of many programmatic areas in the transition roadmap, and the accord contains five articles on health—four of which address emergencies created by COVID-19 and an earthquake on August 14, 2021. Health is important, but, in the accord, the health sector is subordinate to, and operates within, strategic commitments that shape the political, economic, and social determinants of health.

Democracies in the Crosshairs

Viewed through Haiti’s struggles and the Montana Accord, the political context in which global health operates has disconcerting features for the community of democracies. The global rise of authoritarianism over the past sixteen years indicates that many countries are not committed to democratic governance. This trend is associated with the growth of China's power and its interest in spreading its influence and governance model. Authoritarianism now powerfully shapes the political, economic, and social determinants of health around the world. This change happened despite democracies claiming global health leadership during this period and the global health community’s embrace of democracy, human rights, and civil society participation in policymaking.

The desire among many in Haiti for self-determination from foreign powers connects with the trend among low-income countries to pursue "health sovereignty," especially after COVID-19 exposed the dangers of dependence on high-income countries for funding, vaccines, and other health goods. The COVID-provoked desire for more autonomy signals deep dissatisfaction with—including the desire to "decolonize"—global health assistance.

Here, as with Haiti, the primary targets of criticism are the community of democracies—the global health leaders that have provided the lion’s share of the development assistance for health in the post-Cold War period. As if the rise of authoritarianism was not bad enough, the desire for self-determination in Haiti and in global health arises from anger about the behavior of high-income democracies.

Frustrations with such democracies among those in Haiti and beyond have enhanced China's efforts to spread its influence through, for example, its Belt and Road Initiative (BRI). Through BRI, China has made inroads in the Caribbean and has had discussions with Haiti about investing in Haitian infrastructure, much to the displeasure of the United States. Whether Chinese investments through BRI or otherwise are good for helping democratic governance, reducing dependence on foreign powers, and achieving self-determination has been much debated. This controversy reveals how balance-of-power and ideological competition now affect the strategic decisions that shape the determinants of health more than democratic interest in global health, and without the health sector within countries having any voice in the matter.

Authoritarianism now more powerfully shapes the political, economic, and social determinants of health around the world

The community of democracies bears much responsibility for the Haitian crisis and the damage done by the COVID-19 pandemic. Policies adopted to support a vulnerable democracy in Uncle Sam's backyard have not worked, and leading Haitian political figures want no more foreign meddling in the nation's affairs. COVID-19 exposed that the global health leadership claimed by democracies before the pandemic was less impressive than touted in Western capitals, especially as authoritarianism spread globally to influence decisions about the political, economic, and social determinants of health. Low-income countries want more autonomy and sovereignty in global health rather than more of the same from high-income democracies.

Although different in many ways, the policy challenges that Haiti and global health present converge in underscoring the need for democracies to rethink how they support vulnerable democracies and participate in global health. At the moment, the prospects for such a rethink are not good as war in Europe, energy insecurity, inflation, divisive elections, polarized domestic politics, self-destructing governments, and an emboldened China stress the ability of democracies to wield power in accordance with their principles.