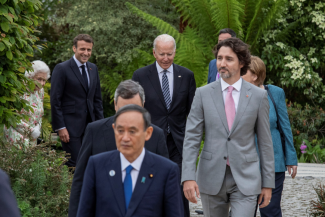 With the COVID-19 pandemic raging, President Joe Biden began his presidency in January 2021 promising to renew U.S. leadership in global health. In the months that followed, his administration’s steps to address the pandemic outside the United States too often appeared reactive, inadequate, hyper-sensitive to domestic politics, and lacking strategic vision. Not anymore.

At the recent G7 summit hosted by the United Kingdom, President Biden made and catalyzed bold moves that revealed an ambitious multilateral strategy for global health and restored U.S. global health leadership.

Before this past weekend’s G7 summit at Carbis Bay, Cornwall, President Biden’s efforts against the pandemic beyond U.S. shores produced confusion and consternation. The president’s early decision to reengage with the World Health Organization (WHO) was followed by an unambitious U.S. performance at the World Health Assembly meeting in May. The billions of dollars that the president pledged in February to the WHO-sponsored COVID-19 Vaccines Global Access (COVAX) initiative largely magnified the lack of vaccine doses available for low-income countries—a situation that arose because the United States and other high-income countries had purchased most of the global supply for their own domestic use.

The administration’s attempts to engage in vaccine diplomacy through small donations and the Quad vaccine partnership looked like tactical reactions in the face of the geopolitical frenzy about Chinese and Russian vaccine diplomacy, the international anger about U.S. vaccine nationalism, and the dangerous shoals of domestic politics. During the World Health Assembly meeting, President Biden escalated the geopolitics of the pandemic with China by ordering another investigation of the origins of COVID-19. The administration’s support for a patent waiver on pandemic vaccines at the World Trade Organization was surprising, but, by itself, a waiver would do little to mitigate what the WHO Director-General Tedros Adhanom Ghebreyesus called “vaccine apartheid.”

Before Cornwall, America was back in global health, but whether the United States had a strategic purpose, core principles, and a coherent plan in coming back was not clear.

The G7 summit proved to be the moment when President Biden significantly increased U.S. commitments to the pandemic response and global health and integrated these moves into his strategic thinking about the role of the United States in a more dangerous world. The president announced that the United States would “purchase and contribute to Gavi or in support of COVAX 500 million doses of Pfizer-BioNTech vaccine” for allocation by the United States “to 92 low and lower-middle income nations around the world.” The scale of this commitment makes the United States the undisputed leader of the global effort to defeat the pandemic because it increases vaccine access and constitutes the first meaningful demonstration of the ability of the United States to be an “arsenal of vaccines.”

This vaccine commitment also changed the geopolitical dynamics of vaccine diplomacy by vaulting the United States past criticism that it was unwilling or unable to compete with China and Russia in this realm. The U.S. decision to work with COVAX and the G7 commitment to channel donated doses primally through COVAX contrasts with China’s preference for bilateral vaccine deals, thus implementing President Biden’s belief in multilateralism. Other G7 members and G7 partner countries followed the president’s lead by pledging another 500 million doses—a demonstration of solidarity among democracies that previously had been lacking against COVID-19. President Biden considers such solidarity vital for democracies to compete effectively against China, Russia, and the global rise of authoritarianism.

The G7 summit proved to be the moment when President Biden significantly increased U.S. commitments to the pandemic response and global health

President Biden also signed the New Atlantic Charter with UK Prime Minister Boris Johnson. The charter contains a vision of a revitalized community of democracies working together to meet the challenges of the twenty-first century—including health, climate change, and cyber threats—and to counter “the efforts of those who seek to undermine our alliances and institutions.” This rejuvenation of the famous World War II-era Atlantic Charter signed in 1941 by President Franklin D. Roosevelt and Prime Minister Winston Churchill embeds the imperative to address transnational threats in a strategic framework anchored in “the principles, values, and institutions of democracy and open societies.” The New Atlantic Charter gives global health an ideological imprint that reflects President Biden’s determination to demonstrate that democracies can deliver solutions for the world’s most pressing problems.

The summit also produced the Carbis Bay Health Declaration, which the UK government called “an historic statement setting out a series of concrete commitments to prevent any repeat of the human and economic devastation wreaked by coronavirus.” The declaration commits G7 members and partner countries “to strengthen our collective defences to better prevent, detect, respond to, and recover from, future pandemics through effective multilateral action and a strengthened global health system.” Among other things, the declaration supports the establishment of an independent process to investigate outbreaks, a One Health approach to pandemic prevention and preparedness, an improved global pathogen surveillance network, and the ability to make vaccines, therapeutics, and diagnostics available within 100 days of WHO declaring a public health emergency of international concern.

The ambitious global health commitments made by President Biden and other political leaders at the G7 summit does not, of course, end the pandemic, reverse the geopolitical gains that China and Russia have made, or ensure another “end of history” triumph for democracies in years to come. Indeed, the pandemic has exposed the inadequacy and ineffectiveness of decades of promises, pledges, and plans to strengthen global health security and cooperation on global health emergencies.

Even so, the president seized the opportunity at the summit to exercise the power and influence of the United States to lead the fight against this and future pandemics, and to challenge its geopolitical rivals, support multilateralism, and chart a way forward for democracies. A strategic purpose, core principles, and a coherent plan. Now, as President Roosevelt and Prime Minister Churchill might observe, the hard work begins.