Many worry it will magnify existing inequalities 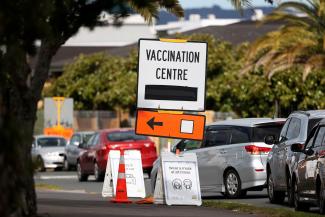 A vaccination center sign directs the public during a lockdown to curb the spread of a COVID-19 outbreak in Auckland, New Zealand, on August 26, 2021. REUTERS/Fiona Goodall
by Jennifer Curtin October 28, 2021

Throughout 2020, New Zealand was held up as one of a few countries that had successfully managed to contain COVID-19. It is widely accepted that this achievement stemmed in large part from the government's decision to close the country's borders and to impose strict lockdowns on its residents to suppress community transmission. Although politically risky and dramatically different from the response taken by most high-income countries, what became known as New Zealand's "elimination" strategy, or "zero-COVID" approach, was increasingly accepted by most New Zealanders as necessary.

The actions taken by Prime Minister Jacinda Ardern were deemed decisive but not divisive—her government's science-informed approach began with a consideration of "flattening the curve" before opting for full elimination. This decision was underpinned by a recognition that the public health system could not sustain anything else. Her ministers emphasized that a strong health response was also the best way to protect the economy, and it was viable because New Zealand was in a strong fiscal position. Both workers and employers were generally positive about the policy responses put in place to ameliorate the economic hit that accompanied elimination, although the wage subsidies did not always reach those most in need.

A Call for COVID Compassion

This focus on both the health and economic well-being of people was underscored by Ardern's personal style of political messaging. Through mainstream and social media platforms, she spoke of the need for all New Zealanders to work together as a "team of five million." She asked New Zealanders to stay in their lockdown bubbles, to take care of each other, to be kind and patient, and to ensure that collectively the country achieved elimination.

Early on, it was evident that New Zealanders expressed high levels of public trust in the government's elimination approach. Seven months after the first lockdown, in fact, Ardern's Labor Party was resoundingly rewarded in New Zealand’s general election, winning 50 percent of the party vote, and 65 seats in the 120-seat parliament. Indeed, it was the first time since New Zealand's adoption of a proportional electoral system 25 years ago that a party had been able to form a majority government. Early analysis of data from the 2020 New Zealand Election Study revealed that trust in Ardern as a leader was statistically significant in explaining the increased support for Labor.

Given this collective endorsement, it is unsurprising that the government continued with its elimination approach in the first half of 2021. On February 13, Auckland—New Zealand's largest city—was subjected to a three-day lockdown to combat a small community outbreak. While a quarantine-free travel bubble with Australia and some Pacific states opened in April, it came with a warning that the borders could once again close at any time.

Some business groups, international education providers, and opposition party figures have argued for a more detailed plan on when and how New Zealand will reopen its borders. And there has been significant ongoing disquiet among expat New Zealanders who want to come home regarding the lack of available quarantine locations. Nevertheless, guided in part by a series of reports—authored by epidemiologist David Skegg, chair of the independent Strategic COVID-19 Public Health Advisory Group, and other public health experts—the government held firm to its elimination approach, arguing instead that vaccinations are a key mechanism to managing the virus when borders reopen.

New Zealand was never going to be immune from the Delta variant. Throughout 2021, a number of people returning from overseas were diagnosed with the variant. The requirement to quarantine for two weeks upon arrival provided a buffer to community transmission. But the quarantine-free trans-Tasman bubble between Sydney and New Zealand was suspended in June following the Delta outbreak in Sydney, and the suspension was expanded further in July to include the whole of Australia.

However, on August 17, the inevitable announcement came that after 16 months of freedom, the Delta variant of COVID-19 was spreading domestically within New Zealand.  Once again, Auckland was the epicenter of the outbreak, and a hard lockdown for the whole of New Zealand began the following day. Community transmission then leaked to regions in the north and south of Auckland, leading to altered alert levels for different parts of the country. Two months on, Auckland remains cut off from the rest of the country. Although, it is now living in a softened version of lockdown, which represents the government's first explicit step away from a full elimination, or Zero-COVID, approach. This comes at a time when many other states that initially favored Zero-COVID strategies, including Vietnam and Singapore, are also backing off from this approach.

Despite some public health experts making a case for a continued hard lockdown, the prime minister announced a transition away from full elimination to a more diluted approach in early October. Ardern tied her decision to increasing vaccination rates, arguing that her decision is part of a broader public health blueprint. However, the efficacy of this approach has been undermined by two factors. The first is that availability and access to vaccination were slow and partial from the outset. Supplies were insufficient for a rapid rollout—a fact acknowledged by Ardern this month. The decision to settle on one vaccine (Pfizer) is accepted as one reason for the delays, but some journalists believe that full transparency on the confidential agreements with vaccine firms would reveal other reasons.

The second factor that affected vaccination rates was that age eligibility categories and vaccination targets were based on whole-of-population numbers rather than accounting for differing age profiles of specific communities. This is particularly relevant for New Zealand's Indigenous Maaori population, whose ancestors arrived from Pacific islands more than 700 years ago. The median age for Maaori is 26, and 24 for Pacific peoples. By contrast, the national median age is 37 (and 41 for European New Zealanders). This meant that a significant majority of Maaori and Pacific peoples did not become eligible for their first vaccination until September 1, two weeks after the Delta outbreak arrived in New Zealand.

While Europe began its vaccine rollout in December 2020, New Zealand began its in mid-February 2021. The government employed a staggered approach, beginning with border workers, essential workers, their families, and those in high-risk groups or settings, including senior care facilities. The incremental rollout continued based primarily on age—and slowly rather than urgently. Indeed, prior to the arrival of the Delta variant, there appeared to be a mix of complacency and a lack of political will to adjust the "one size fits all" approach to vaccination access.

It is unsurprising then that Maaori were more skeptical of the government's response to the COVID-19 outbreak. As early as May 2020, the Maaori pandemic group Te Ropu Whakakaupapa Urutaa—which included more than fifty leading Maaori health experts, policy specialists, and academics—expressed concern at the lack of consultation on how the pandemic was likely to impact Maaori. Dr. Rawiri Jansen called out the government for not consulting with Maaori in organizing the lockdowns, and a year later said the vaccine rollout had been an "overwhelming failure" in that it had not taken ethnicity into account when prioritizing vaccination groups. For example, one study  found that Maaori were 50 percent more likely to die from COVID-19 than non-Maaori due to underlying health conditions.

These disparities and the long history of government oppression and colonialism of the Maaori people mean there remains considerable Maaori distrust in the state's ability to overcome institutionalized racism and provide Maaori with quality and accessible health care, including vaccination.

The arrival of Delta has focused the government's attention on the need for speed in the vaccination rollout, especially given the new, less stringent lockdown rules and the surging number of daily cases. It is estimated that when 90 percent of the overall eligible population of New Zealand is fully vaccinated, only 62 percent of Maaori will have received shots. Maaori experts and activists argue this is because access was not designed with Maaori in mind and the government failed to support delivery of the vaccine by trusted Maaori health providers. Ministers and agencies have justified their approach but they only more recently acknowledged that lockdown restrictions could only be lifted if all groups reached the 90 percent target.

A recent poll showed Ardern retains a high level of support as prime minister, and if an election were held tomorrow, the Labour Party and the Green Party would be able to form a coalition, left-leaning government. Most New Zealanders prefer borders remain closed and 61 percent support mandatory vaccines, but support for domestic lockdowns may soon wane. However, despite their current majority and their mandate for a public health focused pandemic response, the Labour government is stalling on the implementation of additional targeted interventions for Maaori people and retaining hard lockdowns. The science-informed policy response for which the government has become renown has been diluted with a heavy dose of politics. The fact that Maaori are disproportionately affected by new COVID-19 cases in New Zealand reveals why this government’s decisions may yet result in devastating long-tail consequences for our most marginalized communities.

EDITOR'S NOTE: The modern spelling of Maaori uses a single "a" with a macron (a straight bar) over the letter a. Due to technical issues, we are currently unable to add a macron to words within the body of the article above. We are using a double a (aa) as a temporary measure while the macron issue is being resolved.

Jennifer Curtin is a professor of politics and director of the Public Policy Institute at the University of Auckland in New Zealand.