COVID-19 and the Far Right's Diminishing Memory of the Holocaust

Anti-Semitism is on the rise, and it's dangerous for health 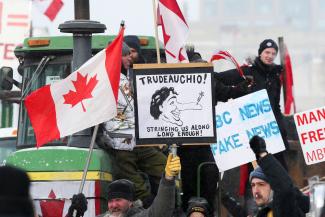 A chilled Spanish soup and a Canadian trucker blockade started the month; a perilous moment in time where the far-right embrace of authoritarianism and fascist tropes, the COVID-19 pandemic, and the Holocaust meet. February's dark coda was the Russian invasion of Ukraine with Vladimir Putin's main pretense the "denazification" of the country.

The warped historical memory and appropriation of the Holocaust range from comically inept to deadly. U.S. Congresswoman Majorie Taylor Greene, butchering "Gestapo," accused House Speaker Nancy Pelosi of leading a "gazpacho police." The incident played for laughs on late-night television and social media. At the same time, a convoy of Canadian truckers occupied the city of Ottawa and blocked Canadian-U.S. border access; these protestors against COVID-19 restrictions waved Nazi and Confederate flags and wore the yellow Star of David. Putin, in an attempt to justify the invasion of a sovereign nation, alleged that a puppet regime of neo-Nazis and drug dealers was oppressing the Ukrainian people. The democratically-elected President Volodymyr Zelensky is Jewish; members of his family were victims of the Holocaust.

The invasion, blockade, and Greene's gaffe point to a larger and more insidious problem: the loss and twisting of collective historical memory of the Holocaust and anti-Semitism. Opposition to COVID-19 restrictions and expert medical recommendations are flush with anti-Semitic conspiracies, Holocaust appropriation, and hate groups, all in service of far-right agendas. Anti-Semitism has often followed disease outbreaks, but this latest hybrid doesn't just pose a threat to the global Jewish community, but to local and global public health efforts and the rule of law and democracy.

In 1349, as the bubonic plague swept through Europe, citizens of Erfurt, Germany massacred the city's Jewish community. The pogrom was one of over 325 recorded organized attacks on Jewish communities during the peak of that pandemic. Scholars point to pre-plague anti-Semitism, and the otherization of Jews, which enabled European leaders to blame the Jews, including the fast-spreading rumors that Jews had poisoned the wells.  During World War I, typhus outbreaks spread across northeast Europe, including Germany, Poland, Ukraine, and Russia; many localities called it the "Jewish fever." Only a few years later, members of Germany's National Socialist party would accuse the Jews of being vectors of lice and diseases like typhus, the start of a sustained propaganda campaign of dehumanization against the German Jewish community. The Nuremberg race laws quickly followed, codifying anti-Semitism in German society, including denaturalizing Jews (along with other "undesirables") and preventing sexual relationships between Jews and Germans. The Nuremberg laws had been a first attempt to address the "Jewish problem," and the Holocaust—or Hitler's "Final Solution"—was the Nazis' attempt to completely eradicate the Jewish people. In addition to perpetrating a genocide, the Nazis engaged in torture, sterilization, and medical experimentation on the Jews, the disabled, and the neurodivergent.

Today, almost every element of the COVID-19 pandemic, from the outbreak and spread to vaccine creation, distribution, and worldwide government responses has been laced with anti-Semitic rhetoric. While anti-Semitic incidents have been on the rise for nearly a decade, COVID-19 has become a new frontier for anti-Semitism and conspiracy, with each year of the pandemic setting record highs of anti-Semitic incidents. Anti-Semitic COVID rhetoric both blames the Jews for the pandemic and its restrictions, while it appropriates Nazi and Holocaust imagery in an attempt to equate the experiences of COVID skeptics, deniers, and anti-vaccine advocates with victims of the Holocaust. There is literally no way to compare those who don't want to wear a mask or get a vaccine to the systematic and industrial slaughter perpetrated by the Nazis on European Jewry. When this false and repugnant comparison is made, it desecrates the memory of the millions of Jews and other murdered undesirables and dilutes the sheer magnitude and evil of the Nazi genocide.

Holocaust-COVID imagery has been recorded in dozens of countries around the world. Extremist groups have littered flyers blaming the pandemic on the Jews and linking to neo-Nazi websites around neighborhoods in ten states including California, Maryland, Wisconsin, and North Carolina. This acts as both a scare tactic, creating palpable fear, and propaganda to advance their worldview. An internet conspiracy theory linked the Rothschild family — the European Jewish banking family and avatar for Jewish plots to control the world — to the creation of the virus. The theory spread so quickly, Reuters devoted an entire article to a fact check.  A spokeswoman for Florida Governor Ron DeSantis amplified a similar conspiracy, suggesting that the Rothschilds were responsible for implementing a COVID passport policy in the country of Georgia. Neo-Nazis and anti-Semitic protest signs are prominent at anti-vaccine and government mandate rallies around the world.

Anti-vaccine and anti-vaccine mandate groups have compared the various mandates to Nazi medical experimentation and government regulations to the Nuremberg laws. The vaccine process is ethical, deliberate, and subject to rigorous scientific oversight, based on years of research, coordinated by a global, multiethnic, and multiracial group of scientists, doctors, and experts. The Nazis viewed themselves as genetically superior and their actions, from torture to slaughter, as being in service of a eugenic "ideal." The Nazis' victims were considered so subhuman that they were in essence empty vessels for the Third Reich "fantasy science." In addition, protestors that refuse vaccination wear the yellow Jewish star, used by the Nazis to identify Jews in order to round them up and send them to the death camps. The appropriation of the Holocaust to drive populist backlash against public health assigns a false moral significance and equivalence to a dangerous trend while empowering those with affinity to far-right authoritarian ideas, anti-Semitism, and racism.

Protests with Holocaust-appropriating imagery are particularly notable in European countries once occupied by the Nazis. Anti-vaccine rallies in Poland included Auschwitz-themed protest signs and chants blaming Jews for the pandemic. Meanwhile, the right-wing Polish government led by the Law and Justice party has taken steps to replace Polish culpability and Nazi collaboration with a narrative of Polish victimhood. In November of 2021, the government unveiled a new monument at the Treblinka extermination camp, honoring a non-Jewish Pole, Jan Maletka, who was shot attempting to give water to Jewish prisoners. Historians believe most Poles who offered water to Jews extorted them for money and that there is scant evidence to justify a memorial for Maletka. Poland has built at least twenty similar memorials in recent years. This comes on the heels of a 2018 law that criminalizes accusations of Polish complicity in the Holocaust. In Hungary, the far-right nationalist party Our Homeland, which called for a "White Hungary" and repeatedly makes anti-Roma and anti-Semitic comments, has organized anti-mandate protests. (The party is an offshoot of Jobbik, once described by one human rights group as the "heirs… to those that had allied themselves with Hitler's Nazi Party.") In Germany, the far-right Alternative for Germany (AfD), known for its members' ties to neo-Nazi groups, and statements minimizing the Holocaust, has led an anti-vaccine, anti-mask-focused election campaign.

Auschwitz-themed signs, anti-Semitic epithets, and more yellow stars have appeared at French protests across the country for months. Speakers at these French anti-vaccine mandate protests include top political leaders on the right, many of whom have ties to former National Front leader Jean-Marie Le Pen, an infamous Holocaust denier and pro-Vichy revisionist. Presidential hopeful Florian Philippot and Jean-Marie's granddaughter Marion Maréchal have led and encouraged protests, along with former Trump advisor Steve Bannon.  Another leader of the anti-COVID movement, former candidate Jean-Frédéric Poisson, made repealing France’s memory laws a central component of his education platform. Eric Zemmour (supported by Maréchal) has called COVID fears overblown, echoed pro-Vichy sentiments, and suggested that the victims of the 2012 Jewish school shooting in France — who were buried in Israel — were "foreigners above all and wanting to remain so beyond death." These politicians continue to encourage anti-mandate protests.

Jewish communities and advocacy groups around the world continue to voice concern over the rise of far-right anti-Semitic and white nationalist groups. These groups and their ideologies have gained prominent footholds in mainstream political discourse. As nationalist movements trend upwards, world Jewry becomes wary; historically, nationalism has led to violence against Jews. The onset of the pandemic was an accelerant to an already smoldering nationalist fire. The embers of that fire still linger from WWII, the Soviet Union, and Europe's long history of anti-Semitism, and were set ablaze once more with the rise of far-right political parties and authoritarianism over the past decade. Economic and human suffering lends itself to conspiracy. The anti-vaccine and anti-mandate movements, with their distrust of government, science, and the global economy, draw in neo-Nazis, white supremacists, and others who are open to conspiracies. The upshot is a series of loosely linked, angry, conspiracy-fueled movements.

The results are threefold. The first is a small, but vocal and politically active group that ignores medical recommendations and defies public health mandates, helping COVID-19 become endemic and putting vulnerable people at risk. Loud opposition to science politicizes common-sense measures, diminishes trust in public institutions, including public health. The second is an emboldened nationalism and defiance of the rule of law. What is touted as civil disobedience looks far more similar to the Ottowa blockade, or the January 6 Insurrection: people become so set in their beliefs that they are willing to eschew democracy, support authoritarianism, and resort to criminal or even terrorist acts to achieve their goals. The third is the spread of anti-Semitism in two forms, the active Jew-blaming or swastika-waving discrimination that Jews have faced for over a thousand years. The other is the diminishing memory of the Holocaust, where every anti-vaxer can wear a yellow star, and every COVID skeptic has it worse than Anne Frank. Collective historical memory of the Holocaust reminds us how quickly democracy can collapse, how an ordinary person can perpetrate great evil, or stand by to let it happen. Every distortion takes humankind further away from the lessons of the Holocaust and further towards the conditions that led to it.

Gideon Weiss is a research associate for Middle East studies at the Council on Foreign Relations.