Go to homepage
Beating the Bidi Habit In India
Governance

Beating the Bidi Habit In India 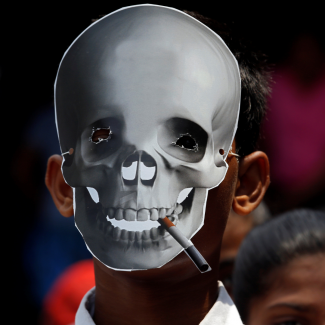 A child wears a skull mask at an anti-tobacco awareness rally on World No Tobacco Day, in Kolkata, India, on May 31, 2019. REUTERS/Rupak De Chowdhuri
by Mary Brophy Marcus October 28, 2022

In India, where almost 267 million people use tobacco—bidis, gutka, cigarettes, hookahs, and more—the country has seen bans on smoking, advertising restrictions, and health warnings on product packages. But, as the poem goes, there are "miles to go," in this case, before India is able to bring tobacco use to a negligible level. Vandana Shah, the director of South Asia programs for the Campaign for Tobacco-Free Kids, talked with Think Global Health about the current state of tobacco use and policy in the country, and the path to a tobacco-free India.

Vandana Shah: In India, tobacco use is very unique. There are three separate, major product buckets. One is cigarettes. The next, which is actually the biggest, is smokeless tobacco, which comes in lots and lots of forms. Some are completely unpackaged and local and then some are packaged, but these are pretty uniquely Indian. The Indian market is similar to what is in Bangladesh and Myanmar. And then there are bidis.

Think Global Health: How many people in India use tobacco?

Vandana Shah: Currently, 28.6 percent of Indians ages fifteen and up are using tobacco. Staggeringly, the burden is smokeless—about 21 percent use smokeless.

What is remarkable is that there has been a 17 percent prevalence decline between the 2009-10 India Global Adult Tobacco Survey (GATS) and the 2016-17 follow-up survey, which surprised even the skeptics. The decline was impressive. A few policy measures had been adopted at the national level as well as increasing levels of implementation at the state level, but experts were still skeptical if all of this would result in prevalence declines.

Think Global Health: Why do so many people use smokeless tobacco?

There's a whole image of smoking being empowering. Even though we've eroded some of that perception, smoking still remains an act of defiance at some level. And smokeless tobacco is often sold as mouth fresheners. For example, tobacco mixed with betel-nut, flavors, spices, scents—and in attractive packaging. It is not perceived as a taboo like smoking. That surrogate advertising gives them social acceptability.

Think Global Health: What about tobacco use among kids?

Vandana Shah: Amongst youth ages thirteen to fifteen the numbers aren't that bad. About 8.5 percent smoke, similar among boys and girls (9.6 percent vs. 7.4 percent).

Think Global Health: What are bidis?

Vandana Shah: Bidis are one of our biggest areas of challenge where we haven't made much progress. Nearly 7.7 percent of adults smoke bidis. They are hand-rolled cigarettes. In India, the bidi is made of uncured tobacco and wrapped in something called a tendu leaf. Bidi and cigarette smokers die six to ten years earlier than their non-smoking counterparts.

It is a very exploitative industry. There are nearly five million women working from home rolling bidis. Many are illegally employed. And also, young children are rolling bidis.

Bidis have been very hard to regulate because it is a very fragmented industry. Even though there are some "bidi barons," as we call the big industry owners, a lot of the production happens in these homes and then there are middle men and brokers that pick up the bidis and take them to the larger bidi factories.

Think Global Health: Where is tobacco being grown?

Vandana Shah: India is the second largest grower—second to China. A lot of times, tobacco control progress in India is thwarted in the name of farmers' livelihoods and bidi workers.

Think Global Health: How do you even begin to chip away at that challenge?

Vandana Shah: A lot of progress has been made on systematically reaching out to bidi workers. In some of the highest-level bidi rolling states in India, there has been outreach to groups in the villages that roll bidis. This is a very exploited group making well below the minimum wage and with many health issues, including respiratory illnesses and gynecological issues due to the bidi dust in homes. And illness is not just experienced by the bidi workers, but also by their families due to tobacco dust in their homes.

There has been a lot of engagement and capacity building with bidi workers so that they are now advocating for their rights. A lot of the workers want to get out of bidi work, so there's a huge demand for better rights, and working conditions, and alternative livelihoods—which the governments promise, but it's never really been realized.

Similarly there is work being done with tobacco farmers. A lot of farmers want to migrate to alternative crops, and there are many successful models of doing so. There are government programs, but they are not adequately funded or supported.

Vandana Shah: In terms of the law in India, we have a fairly good law but there are some key gaps. All public places are smoke-free. But we do allow designated smoking areas in bars and restaurants, and some hotels and airports—these are the only gaps. But starting in 2008, all other places became smoke-free. That's been a big victory because it has been a big social norm change.

The other big thing is that all advertising is banned, although there is still some advertising allowed at the point of sale at the retail level. There is some exploitation and loopholes to do surrogate advertising in non-tobacco, smokeless products. So, one of the mouth fresheners might use the same name to market a tobacco product. And there are a lot of celebrity endorsements, which are banned, but you will find some cricketer or a movie star being used to promote tobacco, especially smokeless.

The big piece in tobacco control right now is that the Ministry of Health in India is working on a comprehensive law to close these loopholes to make India 100 percent smoke-free and advertising free.

Vandana Shah: In 2016, one of largest health warnings in the world was implemented. Every tobacco product pack—not just cigarettes, but smokeless and bidis, too—is covered 85 percent with a warning.

We also have a pretty comprehensive cessation program that has a national quit line, a text-based program, as well as a lot of cessation centers. And some free nicotine replacement therapy (NRT) covered by the government. We meet some of WHO's highest standards for cessation.

State governments have banned gutka, which is tobacco mixed with spices and betel-nut. However they are still available in their new avatar of sale in twin sachets instead of pre-mixed gutka.

India has one of the lowest prices for tobacco products. The government needs to increase taxes on tobacco and utilize the additional revenue gained for cancer prevention and awareness.

Think Global Health: What's on your agenda in the coming months and years?

Vandana Shah: In addition to closing the gap in smoke-free laws, in advertising, we are trying to extend the law to all streaming platforms, like Netflix and Amazon. The government has a final regulation which I'm hoping will come out any day, and that will be the first of its kind in the world.

India has seven or eight other streaming platforms as big as Netflix. All of them are showing tobacco use, where a lot of the story lines involve tobacco as a character, I always say. Where the hero will use tobacco and says he can't do without it. A lot of people in the film and streaming industries are getting a lot of money out of this. So, there is huge concern, and this regulation is ready.

Taxation still remains mediocre, as well. For example, the majority of bidis are not taxed at all. And then there is second-hand smoke exposure. We have our work cut out for us.