Go to homepage
Bangladesh Has Malaria in Its Sights
Poverty 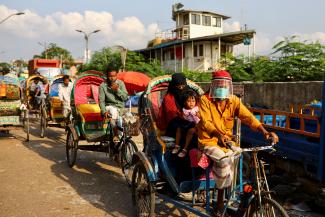 Growing up in Bangladesh, a region with the world's largest delta and lengthy monsoons, mosquito nets were a part of my everyday life. Mosquito nets are a necessity in countries where the climate is hospitable for mosquitos that transmit diseases like malaria and dengue. It wasn't until my family immigrated to Toronto that I realized that the fabric mesh hanging over the bed was not a necessity for many around the world.

In late 2021, after decades of research and clinical trials, the first malaria vaccine for children was recommended for use in children at risk by the World Health Organization (WHO). The new malaria vaccine takes us one step closer to a world without mosquito nets. A rollout in Bangladesh could repeat the success of the country's campaign to eradicate smallpox. Or it could encounter the same obstacles that hindered its rollout of the COVID-19 vaccine.

In 2020, 241 million people were infected with malaria worldwide

In 2020, 241 million people were infected with malaria. The disease is caused by plasmodium parasites and typically spreads to humans through mosquito bites. The malaria vaccine, known by its commercial name as Mosquirix (and RTS,S/AS01 in the scientific community), was first developed by pharma giant GlaxoSmithKline in 1987, but it took more than thirty years before a vaccine was approved for children at risk, most of whom live in sub-Saharan Africa and South Asia. It is an early childhood vaccination given between 6 weeks to 17 months of age.

According to the WHO South-East Asia region (SEARO), Bangladesh ranks fourth in malaria prevalence in the region behind India, Indonesia, and Myanmar. In Bangladesh, the rollout of a vaccine for malaria can greatly reduce the burden on health-care facilities across the country and save many lives.

Bangladesh's success with the smallpox campaign highlights that both policy and programmatic frameworks are an asset to any WHO initiatives on the malaria vaccine. Operation Smallpox Zero adopted the basics of disease eradication comprehensively through three essential steps: surveillance, detection, and containment. Just four years after the 1971 smallpox outbreak, which saw 225,000 cases and 40,000 deaths, Bangladesh completely eradicated the disease. This was a mighty feat for a country that earned its independence in 1971, after a bloody nine-month war. Additionally, the country remains globally renowned for championing childhood mortality through its immunization programs for diphtheria, whooping cough, tetanus, polio, measles, and tuberculosis.

In contrast, Bangladesh's woes with COVID-19 vaccination only seem to be mounting. As of December 3, 2021, only 38 percent of Bangladeshis had received their first dose of a COVID-19 vaccine and only 23 percent had been fully vaccinated. Although the rates have gone up in recent months, 70 percent second dose against population (June, 2022), these numbers are perplexing, particularly given the fact that Bangladesh was held up as a model for childhood vaccination by the GAVI vaccine alliance.

The incongruity makes one ponder whether the country's rapid industrialization in recent decades has worked inversely with vaccine infrastructure. Unlike the case of early childhood vaccination, COVID-19 was accompanied by a scarcity of resources in the health-care sector. Previous immunization campaigns had significant funding and global attention but when it came to COVID-19, Bangladesh, much like the rest of the world, experienced resource shortages.

Zahid Amin, a project coordinator for the Bangladeshi nonprofit organization Uttaran—which operates primarily in the most climate change prone southern regions of the country—spoke about a lack of infrastructure in more remote communities. "One of the biggest challenges we face in the field is access to proper supply chains," Amin said. "Our work with both polio and COVID-19 vaccine distribution, even with the government by our side, has brought to light real gaps in engaging communities in the process of change."

The work of Uttaran uses a rights-based approach to alleviate poverty requires equitable distribution of resources. Mirroring Amin's concerns, the reality of COVID-19 is very different from that of other health crises Bangladesh has faced previously.

Mosquirix is an intramuscular injection with a shelf life of three years and can be stored in a refrigerator between two and eight degrees celsius, so it doesn't come with the storage challenges of COVID-19 vaccines. Breagh Cheng, an epidemiologist and biostatistician from Canada, offered another perspective on the issue. "Infectious diseases represent unique challenges to surveillance and there may be lessons from the COVID-19 pandemic that we can apply to advance progress on malaria," she says.

Cheng went on to highlight that for the majority of the countries in the world, innovations in vaccine supply systems and technology, alongside critical partnerships with local communities and grassroots organizations, may lay the groundwork for a dengue vaccination program someday.

Fortunately, Bangladesh has a robust regulatory environment for vaccine deployment. The country has also overcome major public health challenges through its Expanded Programme on Immunization, made possible by close collaboration between the government, UN agencies, and many local stakeholders.

For the malaria vaccine to be successful, it has to be tailored to the community it serves and be championed by the people who receive it

Each country is unique, and its distinctive culture, economic capacity, and growth trajectory make vaccination program implementation just as unique. Success with one vaccine does not imply success with another, and Bangladesh's performance with the COVID-19 vaccine should not be an indicator of its readiness to handle the malaria vaccine.

Cheng describes how countries in the WHO-SEARO region have made significant strides in reducing malaria incidence over the past two decades, in part due to community-led malaria control efforts. The involvement of local communities will be essential in sustaining progress and closing the last mile to reach people who are traditionally underserved. Ultimately, for the malaria vaccine to be successful, it has to be tailored to the community it serves and be championed by the very people who receive it. Bangladesh's vaccine infrastructure is only as ready to facilitate Mosquirix deployment as its most vulnerable communities are.

Tahmid Hasib Khan is a recent graduate in epidemiology from the Mailman School of Public Health at Columbia University. His research primarily covers global COVID-19 and the opioid crisis in the United States and Canada.