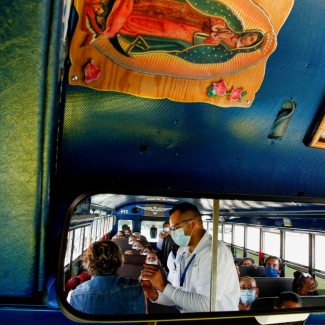 A mirror on a bus reflects the image of assembly factory employees awaiting COVID-19 vaccination, in Ciudad Juarez, Mexico, on May 24, 2021. REUTERS/Jose Luis Gonzalez
by Amy Maxmen December 8, 2022

Health officials met this week in Geneva to discuss a rough draft of a pandemic treaty, an international plan to avoid another disaster on the scale of COVID-19.

This is the first of many drafts to come, in a process that began with a decision made in December 2021 by the World Health Organization's (WHO) 194 member states to develop something like a treaty—perhaps an accord, agreement, or other "instrument"—to govern the global pandemic response. The project is spearheaded by the WHO and is slated for completion in May 2024.

Much of the first draft reads as an idealistic list proclaiming the importance of solidarity and equity in various matters of health. The more heated sections are bound to concern parts of the draft that spell out the means of achieving said equity and solidarity. As Alexandra Phelan, a professor of global and public health law at Georgetown University, says, the rubber hits the road in the operative parts of the treaty, where countries must agree on how to cooperate in a health emergency. "This is where the real negotiations will happen," she says.

Spearheaded by the WHO, a pandemic treaty is slated for completion in May 2024

Knock-down negotiations, however, will come further down the road as the draft is revised. For now, this week's third meeting of the intergovernmental negotiating body, comprised of WHO's member states, focused on comments concerning a very early version that will altered before the diplomats meet again in late February. Roland Driece, from the Netherlands Ministry of Health, and Precious Matsoso, from the South Africa National Department of Health, co-chair the panel and presided over the meeting.

"The best chance we have, today, as a global community, to prevent a repeat of the past is to come together in the spirit of solidarity," Matsoso said, "and develop a global accord that safeguards societies from future pandemic threats."

One source of tension at the meeting pertains to measures in the draft meant to ensure that all regions of the world have equitable access to drugs and vaccines via distributed manufacturing. To get there, the draft discusses several ways to handle the sharing of intellectual property (IP) and scientific knowledge through technology transfer. This discussion was clearly triggered by the world's experience with COVID-19, which has caused many experts to argue that IP barriers and a lack of technology transfer limited supplies of drugs and vaccines in lower income countries and resulted in higher prices. In defense, the pharmaceutical industry has argued that strict IP and voluntary technology transfer is required to incentivize the development of life-saving innovations.

With this debate in mind, the draft lays out several possible wording options. One is to simply "recognize" both sides. Alternatively, the draft suggests spelling out how IP can threaten "the right to health and to scientific progress for all." It also points to a need for mechanisms on how to adapt IP rights in future pandemics, perhaps by supporting "time-bound waivers of protection of intellectual property rights that are a barrier…during pandemics." Another provision in the draft states the need for governments to promote technology transfer to manufacturers in developing countries.

Related, the draft highlights a controversial trade rule, the TRIPS Agreement, in which more than 150 countries belonging to the World Trade Organization (WTO) must adhere to particular IP rules, such as respecting patents for at least twenty years. The inclusion of the agreement also stems from the COVID experience. Concerned about a lack of access to drugs and vaccines, India and South Africa had proposed a waiver on the TRIPS Agreement back in 2020. In the months that followed, the United States and dozens of other countries backed the proposal. But it languished until recently, when the WTO made a deal so limited that it appeared to please no one. So, now the draft treaty recognizes a need to lift the TRIPS Agreement in times of emergency, through existing rules that aren't often used. All of this is touchy.

Before this week's meeting at WHO headquarters in Geneva, a pharmaceutical trade group, the International Federation of Pharmaceutical Manufacturers and Associations (IFPMA), released a statement warning that discussions on IP "detract from the real issues." The organization warns, "Weakened IP in future pandemics will undoubtedly lead to a decline in R&D." And at the meeting on December 5, U.S. ambassador Pamela Hamamoto appeared to support this view, at least in part, suggesting that issues of trade and IP be removed from the treaty because the WTO is better suited to contend with them. "The WHO is not the appropriate venue for discussions on the TRIPS Agreement," she said.

Later, on December 7, the final day of the meeting, U.S. ambassador Hamamoto asked that non-state actors be involved in the treaty-drafting process. She didn't specify an entity, however on Twitter, some global health specialists speculated that this could mean lending more voice to IFPMA or the Gates Foundation, which is occasionally seen as hawkish on IP rights.

Brazil's ambassador countered the United States by saying that IP is an undeniably important issue to contend with in the treaty because countering outbreaks relies heavily on access to drugs and vaccines—access that can be limited when corporations maintain monopolies. "Dealing with issues like IP [rights] is a key element if we want this instrument to truly prepare our countries for the next pandemic," Brazil's representative said. "Failing to do so is a risk we should not run."

If the United States' intention is to simply shift issues of IP and technology transfer to another forum, it's not clear where exactly it expects that to occur. This week, U.S. Trade Representative Katherine Tai released a statement saying that the United States won't agree to a waiver on IP protections on COVID-19 treatments and tests at the World Trade Organization, joining the stance of the European Union. And in a June 2022 White House memo to the World Bank, the Biden administration asked that the bank's new pandemic fund not be used to support distributed drug and vaccine manufacturing because it could "quickly deplete" resources.

A revised draft of the pandemic accord is expected in early February 2023, and the delegation meets again at the end of that month to negotiate in earnest. If the United States and others continue to push back on matters concerning IP and technology transfer, they may need to present an alternative method to ensure drug and vaccine equity in a crisis—one that doesn't merely rely on the same systems that failed to deliver during this pandemic. Many low- and middle-income nations that waited more than a year for ample vaccine supplies are unlikely to let go of this ask. Indeed, more equitable vaccine distribution could have saved an estimated 1.3 million people in 2021.

Perhaps the most interesting idea in the draft discussed this week links the need for equitable drug and vaccine access with the call for countries to quickly share data on outbreaks and pathogens. After all, this data is required for drug and vaccine development. Suerie Moon, a global health researcher at the Graduate Institute of International and Development Studies in Geneva, says that information might become a bargaining chip for low- and middle-income countries. "They're saying, you want our samples, you want us to share data quickly and openly. Then we want access to technology," she says. "That's where you can strike a deal."

Beyond IP, this week's meeting gave countries a chance to draw attention to their concerns about preparing for another pandemic. For example, representatives from Kenya and Uganda said they needed support to strengthen laboratory capacity and their health systems, so that they can meet the treaty's ask for pathogens to be detected and sequenced. And the representative from Fiji pushed for the treaty to emphasize equity, not just in the distribution of countermeasures, but in capabilities to prevent the next pandemic. "Recognizing that we are all responsible, while also recognizing that we do not have the same capabilities," she said. "That difference puts us all at risk."

Amy Maxmen is a science journalist and a press fellow at the Council on Foreign Relations.