A new and ambitious strategy 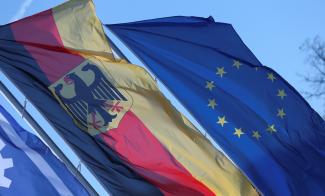 A German flag and a flag of the European Union are pictured during police controls at the French border during the COVID-19 pandemic, in Saarbruecken, Germany, on March 16, 2020. REUTERS/Ralph Orlowski
by Ilona Kickbusch January 3, 2023

The European Commission (EC) presented the new European Union (EU) Global Health Strategy on November 30, 2022, in Brussels. It is an unexpectedly political document that positions global health as an essential pillar of EU external policy, a critical sector geopolitically, and central to EU strategic autonomy.

The EU strategy aims to contribute to a new approach that tackles global challenges and shapes a new global health order through a more strategic, assertive, and effective engagement, and by working in meaningful strategic partnerships. It prioritizes supporting low- and middle-income countries that are seeking health sovereignty.

The EU and its member states are now collectively among the largest funders of global health and together, the EU institutions and countries are the world's leading donor of development assistance and cooperation providing over €50 billion a year. It took a pandemic for the EU to express its strategic ambition to contribute to shaping the future of global health. Now the strategy states quite bluntly that "the EU's influence in shaping the agenda must match its financing support as a champion of global health."

The EU strategy provides twenty guiding principles which are based on the premise of a new approach to multilateral governance and makes them concrete by identifying lines of action. While it maintains some bilateral initiatives, it puts a special emphasis on expanding partnerships in health at a regional level.

This includes a strong follow through of the agreements reached at the Sixth European Union-African Union Summit, which took place in Brussels, on February 17-18, 2022. At the summit, African states had initially criticized the EU for its vaccine nationalism and its positions at the World Trade Organization regarding the TRIPS waiver. Just a day before the Brussels launch, African countries called for a new public health order for Africa.

Other regional initiatives have also begun to be implemented in Latin America and the Caribbean, in the Indo-Pacific, and in the European neighborhood, following the impact of the war in Ukraine. The United States is recognized as an important partner even though it often takes distinct policy positions. The strategy proposes an EU-U.S. task force on health cooperation. This could indeed be helpful in clarifying, if not overcoming, differences.

Many of the experiences gained, as well as criticisms addressed to the EU, during the COVID-19 pandemic reverberate throughout the strategy. In relation to both the pandemic and the climate crisis, we have witnessed what George Montbiot, a Guardian columnist, has called a "violent refusal to care." This has weakened multilateralism and trust between nations.

Montbiot calls on rich nations to meet the twin duties of "care and responsibility," and this could be a good way to judge the EU global health strategy which clearly tries to juggle these twin duties that are expected of the EU globally.

But the EU faces another set of twin duties: strengthening the nexus between the EU's reforms to consolidate its internal capacities, especially in the field of health security, termed a European Health Union (EHU); as well as leveraging its active role to deliver better health for all, living up to its global responsibilities. The EHU can only succeed if it has a strong global dimension, following the realization that "no one is safe until everyone is safe."

There are significant policy ramifications to strengthening this national/regional/global interface, as both the EHU and the global health strategy are further developed as political projects. Everything in Brussels is defined through understandings of where the respective competences lie, and in both cases, the role of the Commission would be significantly strengthened, a direction not all member states agree with.

Much More Than Money

The EU strategy sends a clear message that global health is about much more than providing resources to important global health initiatives and organizations through development finance. It wants to give the significant funding it provides a new direction. Guiding principle nineteen calls to "enhance EU finance for global health with maximum impact." Nine lines of action are proposed including pooled funding and co-investments.

The three interrelated health policy priorities the strategy sets are rather straightforward: first, investing in well-being of all people and addressing root causes; second, reaching universal health coverage; and third, combating current and future health threats. But in all three areas, the strategy identifies what it considers "a different approach"—addressing new drivers and determinants of health in an integrated manner, maximizing powerful enablers such as a skilled workforce, research and digitalization and AI to innovate health systems, enhancing the "ONEHEALTH" approach, and strengthening international rules and cooperation mechanisms on health, including the probable adoption of the pandemic treaty.

The Health in All Policies approach would safeguard that many other areas of commission work would be contributing to these priorities as would EU budget financing programs. Ensuring that health is a strong pillar of the Global Gateway Strategy—Europe's answer to China's Belt and Road Initiative—is as critical as ensuring that it is part of the European Union-African Union strategic cooperation.

As part of its wide consultation processs, the Commission reached out to Global South partners to consult while drafting the strategy. Their concerns are reflected in much of the tone of the document, the focus on health sovereignty for all countries, and in guiding principle eight which aims to "work towards a permanent global mechanism that fosters the development of and equitable access to vaccines and countermeasures for low- and middle-income countries."

WHO at the Center

The EU strategy is very clear on positioning WHO at the centre of any new global health order. Therefore, the presence of the director general of the World Health Organization (WHO) at the launch of the EU strategy was much more than symbolic. The two organizations engaged in what was their first ever EU-WHO Strategic Dialogue and agreed to "further bolster a strong multilateral system with the WHO at its core." The EU wants a seat at the table—first as formal observer with full participation rights and then as full member—or as the EU strategy says, "ensure due EU presence and decision-making role in international organizations." The WHO in turn needs the EU as one of its strongest supporters politically and financially.

In early 2020, the EU stepped in to support the WHO politically and financially when the Donald Trump administration decided first to attack and then to leave the organization. The EU also took the lead to propose a new legal instrument —a "pandemic treaty"—to bind countries around the globe to strengthen national, regional, and global capacities and resilience to future pandemics. After much heated debate—especially with the United States—work on an "instrument" began and the negotiations on a Zero Conceptual Draft have just been completed in Geneva.

Team Europe—the EU, EU member states, and European financial institutions- supported the 50 percent increase of the assessed contributions to WHO and also contributed significantly to financing the new mechanisms ACT-A and COVAX, and most recently, the newly created Pandemic Fund. The Global Health Strategy states that during the COVID Pandemic Team Europe has committed €53.7 billion to support a wide range of responses in 140 partner countries. Just before the launch meeting in Brussels, WHO received a new EU contribution of €125 million for the period 2023–2027 to the EU Universal Health Coverage Partnership with the WHO.

During the pandemic, Europe has committed €53.7 billion to support responses in 140 partner countries

There are many issues to consider as one works through the twenty-four pages of the strategy. Some issues are not highlighted enough, including the climate-health interface where Europe with its Green deal could be contributing significantly, as well as a recognition of a planetary health approach.

The strategy refers to fundamental "European values" such as solidarity, equity and the respect of human rights. This also includes a particular focus on sexual and reproductive health and rights and on the rights of women, children, and young people, LGBTIQ, and other groups with unique needs.

The rights of migrants, refugees, and internally displaced people are mentioned, but European policies in this regard do not hold up. Global health advocates will miss clear positions on intellectual property and weighing health over trade interests.

There is also an inherent contradiction in the aims set in the strategy—to build a new global health order—and the twenty projects listed in the annex of the document, some of which reinforce path dependency. But with all its flaws, we would do well to remember that in these difficult times the EU is one of the few global actors committed to democracy, human rights, rule of law, and multilateralism.

The EU global health strategy is a Commission Communication that is now with the member states who will work on Council Conclusions—adopted by consensus between all EU member states. The Swedish presidency will take on the task of drafting Council Conclusions, which will be discussed at a ministerial meeting in early February 2023. As the EU strategy is firmly grounded in several policy areas it has been proposed that this should be a joint meeting of health, development and foreign affairs ministers.

The most traction will probably be gained from areas where the EU already has a strong mandate and where its ways a working make a difference—especially where it has leverage through its financial strength and regulatory power—also called the Brussels effect.  This can prove particularly critical in the areas of digital transformation and workforce imbalances. But it obviously applies to trade rules, climate standards, immigration policies, and One Health.

The momentum must not be lost. The next few years will decide on the future global health order. In its implementation this EU global health strategy must contribute to moving away from the undemocratic governance of global health where a few hegemonic players still can set the agenda.

Coronavirus in Europe: Who If Not Us?

Can the EU balance internal recovery with geopolitical influence and lift its gaze towards the international sphere?