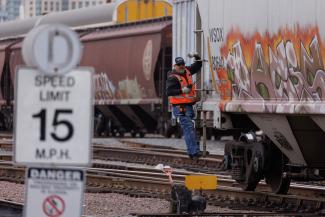 In June of this year, Aaron Hiles, a railway engineer and ex-Marine from Lee's Summit, Missouri, felt unwell enough to make a doctor's appointment. When his employer, a large freight rail carrier, changed his schedule at the last minute, he put off his appointment because his company does not provide paid sick leave and would have penalized him if he skipped a day of work. A few weeks later, Aaron died of a heart attack while on the job.

The U.S. freight rail network, extending almost 140,000 route miles, is the largest rail system in the world. It is also almost entirely privately owned. Railway companies and their workers' unions have been in negotiations for their next contract, and paid sick leave policy has been at the forefront of ongoing debates. Thanks to a nearly one-hundred-year-old bill, Congress has had the power to resolve disputes between labor unions and railroads to prevent disruptions to interstate commerce. U.S. Labor Secretary Martin J. Walsh helped to broker a tentative national contract between the railways and unions in September, which included modest salary increases, but was rejected by multiple railroad worker unions for its omission of any paid sick leave.

Though negotiations were set to continue, President Joe Biden called on Congress last week to intervene. However, a subsequent amendment adding seven days of paid sick leave failed to pass, leaving rail workers little room to negotiate further. These tense deliberations across railways, unions, and the government heightened the national attention around not only the labor rights of railway workers, but also more broadly around employee health protections in the United States.

Paid sick leave is not only a strategy to protect an individual worker's health, it is also recognized as a public health tool that can improve health outcomes for families and communities, all while making workplaces safer. Failing to guarantee these protections risks exacerbating health inequities across racial and income divides, leaving us with a less healthy workforce for tomorrow.

Paid sick leave is a crucial policy measure with the potential to improve employee and family health. Across twenty years of studies, research finds that controlling for socio-economic factors, on average, individuals with paid sick leave have higher odds of having appropriate vaccinations (e.g., flu shot) and preventative tests (e.g., mammograms) than those without such leave. Adults with paid sick leave may also have lower emergency department utilization. Alternatively, U.S. workers without paid sick leave report lower rates of noncommunicable disease screenings (even when such screenings are free) and higher rates of psychological distress.

The protective effect of paid sick leave extends to entire families, as well. The odds that children with at least one parent with access to paid sick leave have had an annual doctor's visit are 27 percent higher than the odds for children whose parents have no paid sick leave. Some research suggests parental paid sick reduces a ​​child's likelihood of visiting the emergency room.

It is clear that the lack of paid sick leave is a significant barrier to accessing appropriate health care. Rail workers like Aaron Hiles are falling between the gaps because they have no paid sick leave. A preventative visit may have saved his life and led to an increased lifespan.

Workers with paid sick leave are...

Paid sick leave is also an effective public health tool. Research suggests access to paid sick leave may result in reduced presenteeism, the practice of working while unwell, which itself has been shown to significantly reduce productivity, resulting in delays in recovery and worsening employee mental health. Significantly, paid sick leave has been found to reduce the transmission of influenza-like illnesses among workers. A 2018 study compared the effects of paid sick leave policy in Washington D.C. and Connecticut and determined that the positive public health impact of paid sick leave could reduce overall absences due to sickness by 18 percent by limiting the spread of disease. This was acutely appreciated during the start of the COVID-19 pandemic. Results from an analysis of federal emergency sick leave measures during the COVID-19 pandemic showed that states that adopted new sick leave policies experienced an average of 400 fewer confirmed COVID-19 cases per state per day. These sick leave policies, however, expired in 2020.

Paid sick leave has consequences for health equity as well. One study conducted during the H1N1 pandemic (2009-10) illustrated racial disparities across a range of social determinants of health—including housing context, job precarity, ability to social distance. The findings indicate that Black and Hispanic adults experience higher rates of exposure to illnesses. The Bureau of Labor Statistics reports that nearly half of all Hispanic workers (48 percent) and more than one-third of Black workers (36 percent) report having no access to paid time off. These disparities are compounded when workers are stratified by income (see figure).

The expansion of remote work capabilities during the COVID-19 pandemic presented additional challenges across racial and educational divides. The Bureau of Labor Statistics reports that nearly half of White respondents were able to work from home, compared to 38 percent of Black respondents. It also reports that almost 24 percent of individuals with a high school education could work from home, compared to nearly 68 percent of individuals with at least a bachelor's degree.

The health of railway workers is uniquely endangered by the unpredictable scheduling requirements of their employers. Workers are also subject to a point scoring system and have reportedly lost points and faced penalties for calling out sick with COVID-19, suffering a heart attack, and getting into a severe car accident. Another employee lost points after missing work when his mother died. Even missing a phone call from the rail company results in point deductions. Once called, workers have ninety to one-hundred-and-twenty minutes to report to the station, depending on the time of day and geographic distance to the station.

Unpredictable work schedules, which have been extensively studied in the retail and food service sectors, have been associated with income volatility and an increased risk of experiencing housing instability or hunger. Irregular work patterns are also associated with smoking, lack of exercise, obesity, and acute sleep loss, which further risks harming employee mental and physical health.

In one study of twenty-two countries ranking highest on the Human Development Index—a composite index of life expectancy, education, and per capita income indicators—the United States stands alone in its complete lack of mandated federal support for workers experiencing either short-term sick days or long-term sick leave. While most other industrialized countries (see figure) leverage legislative tools to guarantee these protections, the United States relies on a patchwork of voluntary employer policies as well as state and local laws to address this need.

Unpaid sick leave leads to delays in health care among workers, families, and children who fail to receive health care until emergencies arise, and it causes people who already experience health inequalities to face additional hurdles to accessing care. While Congress has rejected railway union demands for paid sick leave, public health advocacy organizations are using this opportunity to advocate for federally mandated paid sick leave across industries. American workers should not have to risk going to work sick—which lowers their productivity, damages their health, and exposes their coworkers and the public to illnesses—for fear of risking loss of their salary and employment. The United States can join other high-income countries that guarantee paid sick leave protections to workers.

Ajeet Singh is a physician advocate, working on the front lines of safety-net healthcare delivery while supporting a range of public health interventions to improve the lives of patients.


Priyanka Sethy is pursuing a PhD in government and political science at Harvard University. She is a former research intern at the Council on Foreign Relations, and previously worked as a research assistant at the Saltzman Institute for War at Columbia University and at Harvard Kennedy School's Evidence for Policy Design.

Women in Health Care: A Call for Pandemic Equity

At the G20 in Rome, it's time for a gender-responsive approach to COVID-19