Go to homepage
Latin America, COVID-19, and the Fate of a Post-Pandemic Civilization
Governance 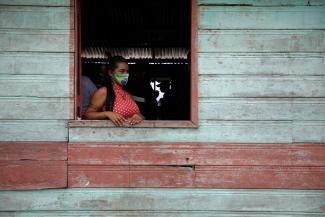 An indigenous woman waits to receive Sinovac's COVID-19 vaccine in the village of São José, which is situated along the Urubu River in the state of Amazonas, Brazil, on February 13, 2021. REUTERS/Bruno Kelly
by Carlos Javier Regazzoni January 14, 2022

As the COVID-19 pandemic enters its third year, Latin America confronts a very difficult 2022. COVID-19 has become a humanitarian crisis across Latin America. The pandemic continues to exacerbate economic and health inequalities, disrupt social life, interfere with cross-border travel and trade, and create stress on domestic political systems and regional diplomacy. The omicron variant has further exposed how vulnerable Latin American countries are and threatens to deepen the health, economic, and political problems that cause suffering in these countries.

The Latin American experience reflects how the pandemic has contributed to the fragmentation of values and power that threatens the global, democratic civilization imagined in the West after the Cold War. Damaged by the pandemic, Latin American countries are in no position to reverse these worrisome trends. Only the United States possesses sufficient power to shift nations and regions back in the direction of the shared values needed to defeat COVID-19 and to prepare international society for a post-pandemic world.

Latin America on the Ropes

COVID-19 has been a global menace, but Latin America has been particularly battered. Four Latin American countries—Argentina, Brazil, Colombia, and Peru—are on the list of the twenty countries worldwide hardest hit by the pandemic. Although countries in the region have made progress toward vaccinating 70 percent of their populations with at least one dose, the delta variant demonstrated the region’s vulnerability. Omicron is now underscoring that vulnerability.

Recent estimates show COVID-19 cases are increasing or likely increasing in all but one country in Latin America. Testing across the continent is weak, and access to booster doses is poor. Whether vaccines heavily used in many Latin American countries—such as the Chinese-produced Coronavac and the Swedish-British Oxford/AstraZeneca vaccines—will effectively protect against the omicron variant is under scrutiny. Anti-viral therapies are not yet available. Non-pharmaceutical interventions are difficult to impose on impoverished populations. Latin American countries have also failed to use regional organizations to galvanize concerted action by cooperating on a host of important issues, such as reaching agreements on vaccine authorizations and acquisition, vaccine certificates, border controls, testing policies, and harmonized epidemiological surveillance.

Nations all over the world are trying to diagnose why national, regional, and multilateral responses to COVID-19 have gone so badly. In Latin America and globally, there has been too much wishful epidemiological, technological, and diplomatic thinking.

Over-reliance on influenza models provided an inaccurate picture of how COVID-19 spreads and how it should be controlled. The lack of a comprehensive strategy has heightened dependence on the ability of companies to provide vaccines and drugs, leaving societies vulnerable to corporate interests and the lack of the financial resources and political commitment needed to make pharmaceutical interventions available everywhere. The pandemic's continued severity has encouraged hopes that COVID-19 would become less dangerous, even though the delta and omicron variants have shown that SARS-CoV-2 can become more severe and threaten the protection that vaccines provide. The failure of multilateralism during COVID-19 has produced proposed solutions that do not reflect consensus on why cooperation failed or what must be done differently in the future.

But the deeper problems behind the Latin American and global failure during COVID-19 concern values and power. Many people have said the right things about the importance of respecting science, the imperative of solidarity at home and abroad, and the need for international cooperation during a global health emergency. However, governments and societies around the world have not demonstrated fidelity with these prescriptions. The exercise of political power within and across borders—including in Latin America—has not reflected the values long considered critical for protecting health, prosperity, and security from pathogenic threats.

COVID-19 emerged when worrying transformations were underway concerning both values and power. In contrast to the spread of democratic governance after the Cold War, democracy—and the political values and human rights associated with it—had been in decline for years prior to the pandemic. Backsliding has been apparent in Latin America, other regions, and even in some of the world’s oldest and most prominent democracies, such as the United States and India. Simultaneously, the distribution of power in the international system has changed significantly as China and Russia successfully challenged the post-Cold War dominance of the United States.

These transformations produced a terrible context in which to tackle a once-in-a-century pandemic. Values about governing have become a source of conflict within and among countries in Latin America and elsewhere. The balance of power is dividing nations politically and ideologically, as seen in controversies involving U.S. and Chinese vaccine diplomacy in Africa, Asia, and Latin America. In such a context, neither epidemiological adjustments based on science nor pharmaceutical innovations are sufficient to sustain effective responses to a dangerous pandemic.

Toward a Post-Pandemic Civilization

There is only one way out of this crisis. The United States must shoulder the burden of restoring the values critical to pandemic preparedness and response by exercising its still enormous power to advance them. The need to realign values and power for global health and other purposes in the post-pandemic world makes the United States the indispensable nation. In this role, one of the most important interventions the United States should undertake is to craft a great-power concert with China focused on threats to global health security.

As the eradication of smallpox during the Cold War demonstrates, great-power rivalry does not have to prevent global health progress. And, after COVID-19, it should be clear that a divided world is dangerous for global health. Collaboration between the United States and China could catalyze the world's ability to confront future epidemics and pandemics. After failing to exercise their power in keeping with global health values, Latin American countries should band together—along with nations in other regions—to facilitate and support U.S.-Chinese cooperation and exploit the opportunities such cooperation can create in domestic, regional, and multilateral contexts.

More U.S. leadership on COVID-19, constructive U.S.-Chinese cooperation on global health security, and renewed Latin American engagement will not resurrect the global, democratic civilization envisioned three decades ago. However, if nations cannot learn to work together more responsibly through the remainder of this pathogenic crisis, then the prospects for handling other global challenges, such as climate change, are grim. How countries emerge from COVID-19 will influence whether a global, post-pandemic civilization can manage transnational threats to the health and hopes of the planet's peoples.