On the heels of an infant formula recall, the FDA faces a review of its food program and proposals for change 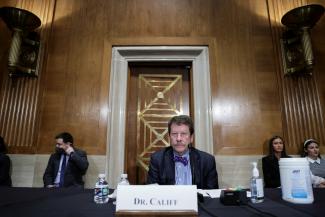 The recent infant formula recall has raised questions regarding the Food and Drug Administration's (FDA) oversight over infant formula, as well as the agency's general oversight over food safety. After a major uproar, the FDA—the U.S. health agency that regulates the country's foods, drugs, and devices—has now asked the Reagan-Udall Foundation to conduct a comprehensive review of the agency's food program.

The structure of FDA's food program is complex and suggestions for improvement run the gamut from improved coordination and timelines for regulatory action to a wholesale reorganization of the FDA, an 18,000-employee agency that regulates about 25 percent of the economy. To evaluate proposals for change, it is first necessary to understand the current structure of the federal government's and the FDA's food safety programs.

The FDA is only one of the players in the federal food safety program. The U.S. Department of Agriculture's Food Safety and Inspection Service (USDA) regulates most poultry, beef, and swine, as well as some egg products—about 20 percent of the food supply. The FDA regulates the other 80 percent. The dividing line between FDA and USDA jurisdiction is byzantine—FDA regulates shell eggs but not egg products; FDA regulates products with less than 3 percent raw meat or 2 percent cooked meat, with USDA taking the rest. While USDA regulates most raw meat, FDA oversees game animals, bison, and deer. It is common for ingredients in a finished food product to pass back and forth between the two agencies as they progress from the farm or ranch to the fork.

USDA regulates most poultry, beef, and swine, as well as some egg products—about 20 percent of the food supply. The FDA regulates the other 80 percent

To add to the complexity, the two agencies have different inspection models. USDA stations food inspectors in food processing plants; FDA relies on inspections the frequency of which are determined by the risk that a facility presents and the structure of detailed preventive measures that a given manufacturer must undertake. The Trump Administration proposed merging the two agencies, but given the need for detailed legislation that would be subject to intense lobbying, and the complexity not just of a reorganization across USDA and the Department of Health and Human Services but a merger of two very different oversight models, the proposal did not gain traction.

Turning to FDA itself, there are three organizations that oversee the agency's food program. The office that sets most food compliance policy and standards and leads in drafting many regulations and guidances is the Center for Food Safety and Applied Nutrition (CFSAN). This office contains most of FDA's scientific policymakers who set standards on topics like milk, juice, and seafood. It decides what manufacturers must do and sets the policy for what actions FDA should take when its standards are not met. It also sets inspection priorities. CFSAN is headed by a center director. There is, however, another policy office involved—the Office of Food Policy and Response (OFPR), which helps lead and coordinate certain cross-cutting and/or high-priority food safety policy activities. Its policy activities overlap substantially with CFSAN's. OFPR is headed by a deputy commissioner for food policy and response. Both the CFSAN center director and deputy commissioner report directly to FDA commissioner. Neither has authority over the other, even when their functions overlap.

In addition to these food offices, there is the Office of Regulatory Affairs (ORA). ORA is basically FDA's "boots on the ground."  It conducts the agency's inspections—not just for food, but for all of the commodities that FDA regulates. It also conducts FDA's surveillance of imports. With a presence in ports of entry, courier hubs, and airports, it ensures that products entering the country comply with FDA regulations, again, for all commodities FDA regulates. ORA also houses the Office of Criminal Investigations. Both CFSAN and ORA have laboratories that develop and evaluate new technologies and test food samples. Although ORA inspects food, medical products, and tobacco, its operations are specialized by commodity. During a 2017 reorganization called "Program Alignment," ORA transitioned from a geography based model—where an inspector in, say, New Jersey would inspect food and drug companies in that state—to a commodity based one, where an inspector would only inspect facilities making one commodity, no matter where the inspector and the facility were located. The intent of the reorganization was to improve coordination between Centers and ORA and to increase specialization.

The proposals to improve FDA's food safety program center on two areas—coordination and the speed of decision making. When ORA, CFSAN, or OFPR receive a signal that there is a problem—from a complaint, whistleblower, test results, recall, or inspection—the relevant offices should be consulted, and the agency should make a prompt decision. It must be clear who is in charge of the various agency decisions that occur when overseeing a food manufacturer (for example, whom to inspect and when, what compliance action to take, and how that action should be implemented).  These areas for improvement are not new; a 2017 Office of Inspector General report made similar recommendations.

There are basically four proposals to address these areas. Two are relatively easy, do not require statutory changes, and would likely lead to prompt improvements. Two are much more difficult and have significant drawbacks and obstacles to execution.

The easiest and likely most effective change would be to develop a detailed "Concept of Operations" for the food program. Following Program Alignment, the Center for Drug Evaluation and Research (CDER) and ORA developed a concept of operations that set out roles and responsibilities for the two organizations and time frames for inspections and compliance actions. Although there are still areas of needed improvement, a recent Department of Health and Human Services Inspector General report noted that drug compliance actions have become more prompt. CDER and ORA have also written a series of internal documents clarifying who is in charge of various decisions and how teams should be structured, vastly reducing duplicative functions. CFSAN, OFPR, and ORA can create similar processes that clarify how and when compliance actions should occur and who is the decision maker. This would be an internal improvement in FDA processes that would not require a statute, regulation, or even a guidance document.

The next possibility is to clarify the responsibilities of CFSAN and OFPR in their significant areas of overlap, including compliance policy and outbreak response. The agency could merge the two offices. While this change would probably require approval by congressional appropriators, it would also be easy to accomplish.

The other two proposals are more difficult to accomplish. The first would be to eliminate ORA and merge FDA's inspection functions into the Centers, including CFSAN (or OFPR). This would leave CFSAN and the other Centers in charge not just of policy but of conducting inspections. The rationale would be that such a structure would clarify lines of authority and in doing so, promote efficiency. However, most of this benefit could be accomplished by a concept of operations, indicating who had decision rights over various activities. This type of matrixed organizational structure is common across industry, including the industries that FDA regulates. It is also common in government. The Federal Bureau of Investigation does not report to the U.S Attorney's Offices it works with in investigating and prosecuting cases. The same is true of local police and most district attorneys. However, there is also a significant drawback to integration. The policy parts of the food program often interact with stakeholders—industry, food safety groups, state regulators—and Congress.

ORA has more limited interactions. In theory, ORA could conduct an inspection that angered a stakeholder while the FDA policy team was interacting with it. The separation of function preserves the independence and integrity of the inspection process. Breaking up ORA would also be practically quite difficult. Many of its functions cannot be divided by commodity, such as the work of import inspectors who examine hundreds of imports per day and cannot tell without opening a bottle of pills whether it is a dietary supplement (categorized as food) or a drug; or whether a box contains deodorant (cosmetic) or anti-perspirant (drug). ORA staff are located in more than 200 buildings across the country. Dispersing it would create a management headache involving six product centers. For these and other reasons, former FDA Commissioner Margaret Hamburg and FDA's senior leadership rejected the idea of eliminating ORA in 2014 and opted instead for Program Alignment.

The second proposal would effect an even larger change. Senator Richard Durbin and Congressperson Rosa DeLauro have introduced the Food Safety Administration Act, which would transfer all of the FDA's food functions to a new agency. FDA would retain medical products and tobacco. This proposal has the strengths and weaknesses of disbanding ORA, but magnified. Implementation would involve not just a statute but dividing up FDA's functions that cut across food and medical products (such as imports, dietary supplements, fraudulent health products, many consumer products, criminal investigations) among different agencies. It would require scores of regulations and guidances to be rewritten and memoranda of understanding to be drafted in order to coordinate the activities between the agencies. In short, it might well cause more harm than good.

FDA's food program shoulders a gigantic task—one that it generally performs well. It could, however, be improved. In deciding what changes to make, policymakers would be wise to focus not just on how new approaches could work, but whether they can be accomplished in the near term. And whether they would create new problems, and whether their benefits could be achieved by proposals that are less dramatic, but likely equally as effective.

Howard Sklamberg is a partner at Arnold & Porter LLP, where he represents FDA-regulated companies. From 2010-2017, he held several senior positions at the FDA, including Deputy Commissioner for Global Regulatory Operations and Policy, where he oversaw the Office of Regulatory Affairs.