Go to homepage
A Gram Per Gun
Governance

A Gram Per Gun 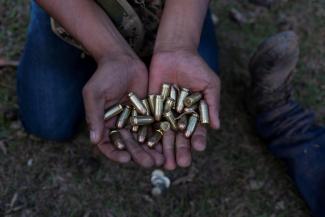 A community police officer displays 45mm caliber bullets for a photo on the outskirts of Ayahualtempa, Mexico, on January 30, 2020. REUTERS/Alexandre Meneghini
by José Pablo Ampudia August 2, 2022

In the wake of the mass shootings in Buffalo, New York and Uvalde, Texas this year, the U.S. Congressional Committee on Oversight and Reform launched an investigation into Gun Industry Practices and Profits. Its initial findings, released on July 27, state that gun manufacturers collected more than $1 billion in revenue from the sale of semi-automatic weapons to civilians in the last decade, and that sales are increasing as gun deaths and mass shootings rise. But the problem doesn't stop at the U.S. border. While illuminating, the Committee's findings miss a large piece of the puzzle: U.S.-manufactured guns play a critical role in arming Mexican cartels and, consequently, perpetuating drug use in the United States.

An estimated 2.5 million weapons have been smuggled across the border from the United States since 2010

The U.S. government is not the first to scrutinize gun manufacturers for the violence enacted with their products. In 2021, the Mexican government sued some of the same manufacturers named in the congressional investigation for contributing to the flood of illegal arms into Mexico. Over 200,000 guns are trafficked annually from the United States into Mexico, providing cartels with many of the resources they need to run their operations and smuggle drugs into the United States.

U.S.-sourced firearms placed in the hands of the cartels also contribute to ongoing violence in Mexico. They have provided cartels with firepower capable of overwhelming law enforcement on both sides of the border. Worse, as the cartels have grown their arsenals, they've also strengthened their operational capabilities to produce and smuggle drugs into the United States. Drug smuggling across the southwest border cannot be stopped as long as the cartels continue to expand their arsenals. The guns have to go first.

Mexican cartels pose the single greatest criminal drug threat to the United States in the world, controlling about 90 percent of the U.S. drug market, according to the U.S. Drug Enforcement Administration (DEA)—a feat the cartels could only pull off with their cache of American weapons. An estimated 2.5 million weapons have been smuggled across the border from the United States since 2010, including military-grade weapons such as .50-caliber rifles that can shoot down helicopters.

About 70 percent of all firearms seized in Mexico originated in the United States. Data from the Department of Justice Bureau of Alcohol, Tobacco, Firearms, and Explosives (ATF) shows that most cartel weapons were purchased legally in gun shops in southwest border states—predominantly Texas, California, and Arizona—and then smuggled illegally into Mexico. Some studies even suggest that nearly half of U.S. firearm dealers depend on Mexican demand. Indeed, part of the reason cartels use the United States as their primary source for acquiring weapons is because it is easier to obtain a weapon in the United States and smuggle it across U.S. borders than it is to contend with Mexico's severely restrictive gun laws. While over 52,000 licensed gun dealers in the United States sold more than 18 million weapons in 2021 alone—the second highest year for gun sales in history just after 2020—Mexico has just one gun store in the entire country. Given this math, it's not hard to understand why Mexican cartels opt to traffic guns from the United States.

The Health Costs of Gun Trafficking

With U.S. made guns in their holsters, cartels have been able to expand and protect their illicit drug trade. This translates into heightened levels of drug availability and potential for drug use across the United States. The 2020 U.S. government's annual survey on drug abuse found that illicit drug use has been on the rise over the past decade and that the overdose rate is dramatically increasing. To put it in perspective, more than 90,000 Americans died from an overdose in 2020 alone, up from almost 70,000 in 2019. Additionally, data from the CDC's National Center for Health Statistics indicates an estimated 100,306 drug overdose deaths in the United States during the twelve-month period ending in April 2021—a 28.5 percent increase from the same period the year before. Those numbers will likely rise if the United States continues to export illegal firearms to the cartels.

The violence isn't limited to the United States. Organized crime is linked to the deaths of more than 300,000 people in Mexico since 2006, and to the disappearance of almost 80,000 more. What's more, the Mexican national homicide rate by 84 percent between 2015 and 2020, and the percentage of gun-related homicides rose from 24 percent in 2004 to 69 percent in 2018 —percentages that track contemporaneously with increased gun production in the United States.

To be sure, this is not an argument against the Second Amendment right to bear arms, nor does this suggest Mexico has no responsibility to fight and disrupt criminal organizations in its midst. However, the cartels' firepower has made it impossible for the Mexican government to stop them alone. Stemming the tide of U.S.-trafficked guns would go a long way toward leveling the playing field for law enforcement. Thus far, the United States has failed to prevent rampant gun trafficking to Mexico. And both countries are paying the consequences.

Drug smuggling across the southwest border cannot be stopped as long as the cartels continue to expand their arsenals. The guns have to go first

With record-high profits, sales, and deaths on both sides of the border, the U.S. government should focus on manufacturers' weapons leaving the country to prevent increasing levels of violence and drug availability. Additional regulation and restrictions on the firearm industries, enhanced tracking and monitoring mechanisms, together with stricter background checks and additional resources to the ATF and the border states to impede the illegal influx of weapons into Mexico, are good places to start. Congress and gun-manufacturers cannot remain with their head in the sand.

The significant increase in U.S.-manufactured weapons illegally trafficked into Mexico has clearly contributed to drug availability and, consequently to drug use in the United States. Current policies, regulations, and the Committee's findings, however, fail to take this into account. The only way to prevent gun and drug-related deaths from increasing —on both sides of the border— is for the United States to take aggressive action to dismantle gun trafficking over the border and to hold gun-manufacturers liable for their practices that overflow into the south. As one gun expert noted during a Committee hearing, the "gun industry has grown tremendously over the last two decades, business is booming" but so are deaths and drug addiction, which will continue to grow unless the United States and Mexico stop trading grams for guns once and for all.

José Pablo Ampudia is an MPA candidate at Columbia University, specializing in international security and intelligence, and a current intern at the Council on Foreign Relations. He is a Mexican lawyer and former advisor to Chief Justice Arturo Zaldívar of the Mexican Supreme Court.