Go to homepage
Controlling Tobacco Use in the United States
Governance

Controlling Tobacco Use in the United States 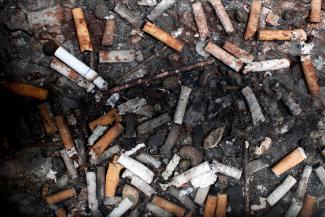 Discarded cigarette butts are seen beneath a sidewalk grating in Manhattan in New York City on May 8, 2017. REUTERS/Mike Segar
by Mary Brophy Marcus and Caroline Kantis May 6, 2021

In a long-expected announcement, U.S. health policy makers promised last week to ban menthol-flavored cigarettes and flavored cigars once and for all within the year. The Food and Drug Administration (FDA) plans to propose a policy that will put the United States on a short list of countries at the forefront of efforts to control use of the products, sold for decades under the moniker "menthols."

"It will bring the United States up to speed with these other countries at the forefront of tobacco control policy and it puts the United States in a position to help set a global precedent on flavor bans," says Marissa Reitsma, a research scientist at the Institute for Health Metrics and Evaluation at the University of Washington.

The move is aimed at reducing tobacco-related diseases, smoking among young people, and tobacco use among Black Americans, who have been heavily targeted by tobacco company advertising and are more likely to smoke menthol cigarettes than the rest of the population.

Taking a global snapshot, there are more than a billion smokers in the world and each year, tens of millions of people become new smokers, many of whom are young. Menthol-flavored smoking products make it easier to take up a tobacco habit, explains Reitsma. The minty flavor masks the unpleasant and harsh taste of tobacco as it goes down the throat.

"If you can't curb youth tobacco use, you can’t broadly control tobacco use," says Reitsma, who is also pursuing a doctoral degree in health policy at Stanford.

At least 55 countries regulate flavorings in tobacco products, including menthol, says Maria Carmona, director of the international research unit at the Campaign for Tobacco-Free Kids, an advocacy organization that works to reduce tobacco use in the United States and around the world.

"These regulations can include complete or partial bans, and they may include some or all types of tobacco products,” says Carmona, noting that when you dig a little deeper, you find that 27 of the 55 countries are part of the European Union. That's because in 2014, the EU issued its Tobacco Products Directive, which included a ban on most flavors—excluding menthol—and came into effect in 2016. In 2020, menthol was banned too.

Beyond the EU, Brazil is also considered a global leader in tobacco control, in par because of its ban on most tobacco product additives, including menthol, says Carmona.

"Almost 10 years ago, the government issued a regulation banning almost all additives, not just flavors,"  Carmona says, and after years of litigation, the ban was upheld.

While Congress passed the Tobacco Control Act a decade ago, too, it's taken the United States longer than Brazil to push a menthol ban forward.

Brazil is also seen as progressive because it was among the first countries to add pictorial warning labels to products, to ban smoking in public places, and to introduce tobacco advertising restrictions.

University of Washington's Reitsma says, "We've seen a 70 percent reduction in tobacco use over the last three decades as Brazil has progressively strengthened their tobacco control measures. They've gotten smoking prevalence down below 10 percent. Other countries should be looking to them as an exemplar in tobacco control. And they were one of the only countries to have a menthol tobacco ban early on."

Brazil has reduced its smoking prevalence to below 10 percent

Big tobacco has an eye on Africa, says public health experts. The economic growth in countries such as Nigeria, Kenya, and South Africa is not lost on the tobacco industry.

"If there's room for the tobacco industry to operate in a country, they will," says Reitsma.

Health ministries and public health groups in sub-Saharan Africa are aware of the risk and are already investing in controlling tobacco products, including menthol-flavored cigarettes — before they take hold.

The WHO Framework Convention on Tobacco Control — the world's only public health treaty — was developed in response to the globalization of the tobacco epidemic and almost all of Africa is a party to it.

"African countries see it as their objective to pass and implement these policies to prevent the epidemic from really taking off and skyrocketing there. They're dealing with enough when it comes to health issues and health care and they can't let this take off," says Carmona.

The tobacco epidemic has not taken the same route in sub-Saharan African that it has in many high-income countries, the United States included, "but it's my perspective that the tobacco industry now sees Africa as a huge growth market," says Carmona.

Ethiopia has one of the strongest sets of tobacco laws in the world under the WHO treaty. For example, it mandates that all public places must be smoke-free, including bars, restaurants, and schools. There are bans on advertising of tobacco products via radio, television, newsprint, and point-of-sale locations in stores. Large warning labels are required on tobacco products, and pictorials — images of diseased lungs — can also appear on products.

Civil society groups, the health ministry, and Ethiopia's prime minister got behind the anti-tobacco movement in the country.

"It's really helpful when you have presidents and prime ministers who support these efforts," Carmona says.

The data is not in yet on the long-term effects on health of menthol tobacco bans, but early findings show promise. Canada implemented bans on menthol cigarettes in 2016 and 2017 which led to a significant increase in the number of smokers who attempted to quit, smokers who quit successfully, and lower rates of relapse among former smokers, researchers from the University of Waterloo in Ontario recently reported.

The FDA estimates that there are almost 18.6 million current menthol cigarette smokers in the United States. But even with the agency's pronouncement last week, there's still a lot of work to be done to curb the use of menthol products, say public health experts.

Matthew L. Myers, president of the Campaign for Tobacco-Free Kids, says, "While most public health advocates are hoping for a ban within a year, a full-blown menthol ban in the United States will probably take several years to impose due to legal challenges from tobacco companies."