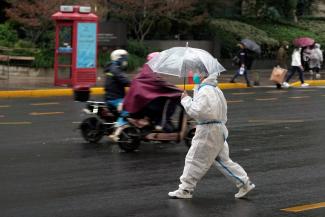 A worker in a protective suit crosses a road in the rain during a COVID-19 outbreak in Shanghai, China November 30, 2022. REUTERS/Aly Song
by Chen Chen December 7, 2022

Over the last three years, news articles published by popular Chinese media outlets about COVID-19 and the pandemic have been increasingly censored by the Chinese government and in turn, by corporate channels that run various media platforms. Publications and their reporters tiptoe around sensitive subjects and face repercussions by leadership if their coverage attracts attention.

Jason Q. Ng, a data scientist and independent researcher who wrote "Blocked on Weibo: What Gets Suppressed on China’s Version of Twitter (and Why)," investigated the avenues, nuances, and customization of censorship in and around China.

"For certain articles, even if [readers] do comment and post on controversial articles, the comments might only be visible to yourself, and others won’t be able to see them," Ng said. "And even if a news outlet is able to post something, rather than removing the article, [government censors] just make it harder for the articles to go viral."

In the past week, front pages of domestic news outlets within China have been poking at changes and weaknesses to the Zero-COVID policies—opening a new window of critique that may or may not last.

What Chinese Media Outlets Are Reporting

As protests against pandemic measures took place in cities and universities across the nation over the past two weeks, none of the major Chinese news sites made any mention of them, but all ran articles about the government's new policy of less testing and fewer lockdowns.

A former journalist at a major Chinese news outlet, who asked to remain anonymous to avoid possible retaliation, spoke about the difficulty of reporting on the pandemic domestically. "Now, [my colleagues] rarely write [about the] pandemic, because they cannot write about the negative impact of the pandemic policy anymore," the source said. "But in the past, some of them did."

Like the blank sheets of paper that Chinese protesters were raising to symbolize the limits on free speech, erratic and rampant censorship of news media in China necessitates reading between the lines—saying nothing often says everything.

Last week, during a National Health Commission symposium, Vice Premier Sun Chunlan said that Omicron variant is relatively mild—an assertion that has largely been avoided in Chinese media until now. China's “dynamic Zero-COVID” policy—rhetoric meant to project the government's ever-adapting actions to stem the spread of COVID—which has headlined official state policy for most of this year, is missing from her statements. Without noting China's highest ever recorded COVID-19 infection numbers, at over 30,000 cases per week, Sun said that China's "disease control system has withstood the test."

Xinhua News Agency, China's official state news agency, released a statement on December 1 advocating for nationwide "quick sealing and quick release"—locking down for a few days and testing for infection by building or neighborhood—rather than continuous city-wide lockdowns and mass testing. This was announced all while the southern cities of Guangzhou and Kunming were lifting certain local lockdowns. Chengdu and Beijing scrapped their forty-eight-hour COVID test requirements to enter public indoor spaces. At the same time these cities were seemingly reopening, others, like Shandong, were tightening their Zero-COVID restrictions.

Pengpai, a digital newspaper owned by Shanghai United Media Group, on December 1 reaffirmed that "pandemic measures are not relaxing" in Shandong, a province in eastern China, and emphasized the classifications of red, yellow, and green for the Shandong health code. For Shandong, red means either a confirmed positive case or an asymptomatic positive (symptomatic and asymptomatic cases are counted separately in China). Close contacts of COVID-positive cases also have a red code for five days, which means five days of centralized quarantine. A yellow code designates home quarantine or self-monitoring. The health code has been in place since the beginning of the pandemic and continues to determine where Chinese residents are allowed to enter and who needs to be taken to a quarantine center. Shandong's Municipal Party Committee reaffirmed their commitment to strictly implementing pandemic management and adhering to scanning health codes in public places.

Frustration with COVID-19 tests has heightened in light of reports of low quality or fraud test sites around the country, according to Pengpai. Cities like Shenzhen and Chongqing are exchanging their city-wide testing for smaller scale testing. The legality and controversy surrounding the residential committees that enforce COVID controls at the neighborhood level has also been reported.

The Intellectual, a popular science publication based in Beijing, recently published a piece on how Germany successfully reopened and returned to "normal" during the pandemic. The story concludes that "although COVID-19 will persist for a long time and will also bring a large number of infections and a certain number of deaths, Germany's epidemic prevention policy will continue to be relaxed and people will return to normal life."

An article published on Weibo on December 4, titled "No Way Out—the Success or Failure of Three Years of Epidemic Prevention," was later censored on WeChat, the all-encompassing, popular Chinese social media platform. By December 5, clicking on the article led to the standard censorship page with the red exclamation mark. "This material violates regulations, unable to view," blocking WeChat users from viewing.

"My experience from talking to people [in China] is that sometimes it's unclear why some stories suddenly get killed," said CFR senior fellow Josh Kurlantzick, author of Beijing's Global Media Offensive: China's Uneven Campaign to Influence Asia and the World.

In a press conference last week, Cheng Youquan, director of the Supervision Department of the National Bureau for Disease Control and Prevention, said that there are "twenty optimization measures, each of which has a sufficient scientific basis and evidence to support." China is now in its ninth edition of their national COVID-19 prevention and control plans, which was rolled out in late June of this year.

December 7, the People's Daily—the official newspaper of the Central Committee of the Chinese Communist Party—announced that domestic travelers to Beijing no longer need to show their health code and negative COVID-19 test. However, employees and personnel in "high-risk positions" such as working in schools, bars, canteens, saunas, and other indoor spaces are still required to take forty-eight-hour COVID tests. Schools are being asked to delineate pandemic risk areas, likely referring to clusters of COVID-19 positive cases, and to allow normal activity outside of those areas.

Also on December 7, the People's Daily gave a preview of the ten new national pandemic control rules that are going to be implemented. Centralized quarantine will soon be optional and sealing doors and blocking exits will be banned. However, the article says the "quick seal, quick release" strategy requires no new infections for five consecutive days in order for high-risk areas to be released from lockdown.

While many of these news reports are using buzzwords like 'optimization,' 'precise,' and 'targeted,' one glance at the front pages shows that some of the cumbersome, ineffective aspects of pandemic management in China like Dabai—or big white protective suits—are here to stay.

Moving the Needle on Health Disinformation