Go to homepage
To Boost or Not to Boost: It's Complicated
Governance

To Boost or Not to Boost: It's Complicated

It's probably too soon for most Americans to get another shot 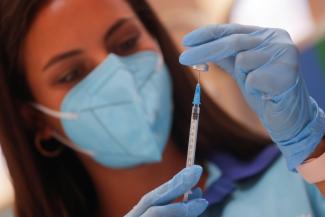 The creation of multiple, very safe, and highly effective vaccines last year was a triumph for medical science. None of us, and indeed nobody we know, expected the Moderna and Pfizer mRNA vaccines to be 95 percent effective at protecting against symptomatic COVID-19. And although the Johnson & Johnson and AstraZeneca vaccines came in a little lower on the efficacy scale, they were still rightly viewed as highly protective, particularly when it came to reducing hospitalizations and deaths.

Now, about eight months later, the public perception of COVID vaccines seems riddled with doom and gloom. Are they now failing? Are the new variants, particularly the damnable Delta, damaging our confidence in what vaccines can still do for us? Do we need booster shots? We will try here to explain why vaccines remain the world's best hope of moving beyond the pandemic, and what can be done to further improve the strong protection afforded by the vaccines we are already using.

"Are the new variants, particularly the damnable Delta, damaging our confidence in what vaccines can still do for us?"

First, what should we expect from vaccines, particularly ones that protect against a respiratory virus such as SARS-CoV-2? It's commonly thought that vaccines always stop infections from happening but, in fact, that's not usually true. More often, vaccines allow a low-level infection to take place, but strongly limit its severity and help prevent serious illness.

Most viral respiratory infections start when a virus enters the nose and replicates in the upper respiratory tract (URT). Often, that's as far as it goes–local immunity wins the battle against the virus, and the person either has minimal symptoms or none at all. This is also the most common outcome of SARS-CoV-2 infection–asymptomatic or mild COVID-19. Both innate immunity (e.g., interferons) and, in vaccinated people, antiviral antibodies, may also be involved in warding off or restricting this initial stage of infection. But sometimes, these defenses are overwhelmed and the virus spills over into the lower respiratory tract (LRT), enters the lungs and leads to severe illness, hospitalization, and death. The vaccines are really good at inducing immunity in the LRT, which is why they are life-savers.

The Delta variant is "the same but different," and it's making the COVID-19 story more complicated. The genetic changes in the Delta variant, some not yet understood, allow it to replicate more efficiently. One estimate is that there is 1,000-fold more virus in the nose of Delta-infected people than scientists saw in the noses of people infected with the 2020 viruses. Since it's all a numbers game, the more virus in the nose, the more that's sneezed or breathed out, and the more likely someone nearby will inhale those infectious particles. This is what's behind Delta's destructive dissemination wherever it goes. The vaccines may be less effective at limiting that initial burst of Delta replication in the URT than they are at preventing infection in the lungs. This results in infected people who can carry a great deal of virus in their noses and throats for a few days at least.

Vaccine-triggered immunity kicks in quickly to control viral replication and reduce the duration of infectiousness to others. Ultimately, vaccines help prevent severe disease and death in those who've had their shots, and they may reduce onward transmission of the virus to others.

"As more and more Americans are vaccinated, more infections will occur among fully vaccinated people"

Second, how long does immunity last? Are vaccinated people losing their immunity over time?

It is inevitable that immune responses generated by vaccines or natural infections wane over time. One frequently reported component of the immune response is antibody levels ("titers") to the viral spike-protein. Antibodies are a key part of antiviral immunity. Their titers in the blood drop gradually over time, but they don't fall off a cliff. And antibodies are only one component of our immune response to viral infections. Memory B-cells—long-lived plasma cells and T-cells—may continue to offer robust protection against disease and death even as antibody titers diminish over time. This is why longitudinal vaccine cohorts, long-term studies of groups of people who have received their COVID-19 shots, are an important complement to what we can learn from laboratory-based studies. The rates of infection and disease seen in these cohorts give us a more big-picture assessment of whether protection is degrading, and at what rate.

We're all now hearing about vaccine breakthrough infections, but what fraction of the vaccinated population ends up hospitalized or dies? Recent cohort studies found that the effectiveness of the Pfizer vaccine dropped from 95 percent to 83 percent after six months. That might sound troubling, but to put that into perspective, the one-dose Johnson & Johnson vaccine was about 75 percent effective against severe disease, hospitalization, and death when it was authorized by the FDA.

Third, will some people need an additional dose of vaccine to enhance their protection against severe disease, hospitalization, and death? And if so, who?

Overall, we think it's too soon for most Americans vaccinated in early 2021 to be given an additional dose of vaccine—a "booster shot." But not everyone is the same—there are people with significant medical conditions that blunt or eliminate their ability to mount an immune response to vaccines. For example, organ transplant recipients and patients with autoimmune disease or certain types of cancer often take highly immunosuppressive drugs that prevent them from mounting a strong immune response after the standard vaccination regimen, and some people have genetic conditions that also compromise their immune systems. Studies have shown that some highly immunocompromised persons do benefit from a third mRNA vaccine dose. Giving them better protection is an urgent priority.

"The answer to this pandemic, the only answer, is mass vaccination"

People who are over the age of 80, particularly nursing home residents, are another high-priority group that deserves early access to additional vaccine doses. Vaccines work a little less well in older than younger folks, and COVID-19 is much more severe in the elderly.

Some European countries are now offering additional doses to both immunocompromised and older residents. We anticipate that happening in the United States, too.

Finally, we must weigh morality and pragmatism. The world's population is seriously under-vaccinated. Should we be vaccinating our people a third time when so much of the world is desperate for their first dose? The World Health Organization recognizes this point and has asked for a temporary moratorium on vaccine boosters. Americans have a deserved reputation for stepping up and doing the right thing when it matters most. And here's the pragmatic point—the world is interconnected, and we cannot build a wall to shield America from respiratory viruses. The Delta variant is not the worst we can imagine—one that combines the transmissibility of Delta with the immune-evading properties of Beta would be a scary proposition. The more SARS-CoV-2 spreads and replicates, and the longer the pandemic continues, the more likely it is that a variant could emerge that's even more infectious than Delta and more immune-evading than Beta. That new variant could just as easily arise in Louisiana as in Liberia, in Florida as in France, in Missouri as in Mexico. The answer to this pandemic, the only answer, is mass vaccination. When no one is an island, it's not enough to vaccinate them. We must also vaccinate the sea of people swimming around them.

John P. Moore is a professor of microbiology and immunology at Weill Cornell Medicine in New York City.


Luciana Borio is an infectious disease specialist and a venture partner with Arch Venture Partners, and a senior fellow for global health at the Council on Foreign Relations (CFR).


Céline Gounder is an internist, infectious disease specialist, and epidemiologist at the NYU Grossman School of Medicine and Bellevue Hospital in New York City.