Go to homepage
Up and Out of the Darkness
Governance

Up and Out of the Darkness

COVID-19 forced many into isolation, bringing attention to the long-term effects of loneliness on health 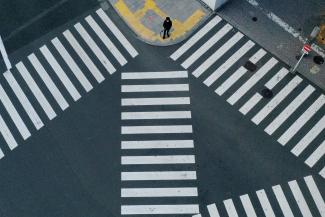 A man waits to cross a street in front of Tokyo's Shinjuku station, a normally crowded street, after the government expanded a state of emergency across all of Japan, following a COVID outbreak. REUTERS/Kim Kyung-Hoon
by Ted Alcorn November 16, 2021

Smoking, obesity, and physical inactivity are commonly recognized as detrimental to health, but many would be surprised to learn that loneliness rivals them as a risk factor for premature death. There's also a growing awareness that, far from being a private condition best left up to individuals to address on their own, loneliness is shaped by collective conditions and ripe for public health intervention.

On November 18, some of the world's leading researchers and practitioners will convene virtually for the Campaign to End Loneliness International Conference to present the latest science and practices. According to program director Robin Hewings, a pandemic that "made people reflect more on the importance of social relationships" has only further underscored the topic's importance. Exposed to unprecedented degrees of social isolation, the global community has a heightened awareness of the significance of human connection, and policymakers may feel a growing impetus to act.

The Problem of Loneliness

As social creatures, human beings are wired to interact with one another and dependent on interconnection. Being alone isn’t painful for everyone—tolerance for isolation varies person to person. Rather, loneliness describes a subjective experience arising from a mismatch between the number and character of relationships a person has versus what they desire.

About a quarter of older Americans are socially isolated but an even larger share feel lonely. Both loneliness and social isolation can have consequences for physical health. High levels of loneliness are associated with a greatly increased risk of dementia, poorer survival rates following heart failure, and increased risk of coronary heart disease and stroke.

When governments responded to COVID-19 with lockdowns, many people entered isolation unaware that they might be largely alone for six months or more. It quickly dawned on some researchers that "the largest isolation experiment in history" could carry a significant toll on health above and beyond the direct impact of the virus.

The United Kingdom was well-prepared to measure and respond to it. Back in 2018, the country appointed a minister responsible for addressing loneliness and developed a national strategy including "heat maps" showing areas of particular need. For years, the United Kingdom's Office for National Statistics has measured loneliness using annual surveys of the general population.

Since the onset of the pandemic, the country has conducted weekly surveys with additional questions to monitor changes in loneliness with greater precision. While some individuals report spending more time with family or improvements in their relationships, on the whole, loneliness has broadened and deepened throughout the country. According to Chris Payne, who heads the Quality of Life and Social Analysis team at the Office for National Statistics, people who were already at risk of loneliness, such as younger adults, were most heavily affected. Loneliness peaked with the arrival of the Delta variant in late 2020, which forced an extension of lockdowns and ruined long-awaited holiday plans.

"That led into a pretty grim January-February period," Payne said.

Most concerning of all, chronic loneliness—frequent or unrelenting feelings of loneliness—also rose. Whereas typically, about 5 percent of the population reports often or always feeling lonely, that figure ticked up to 7 percent during COVID lockdowns, an increase of about one million adults.

"It's the more severe end of loneliness that we worried most about," said Hewings. "It's harder for people to get out of it. It's more psychologically damaging. And it's the kind of loneliness we think has effects on mental and physical health."

The science of how to address loneliness is still in its infancy compared to, say, means of reducing tobacco use. In a 2020 report, the National Academies of Sciences, Engineering, and Medicine called for more funding for basic science related to social connectivity and health. Still, there is a growing body of evidence about effective interventions. Organizations tend to focus on men because they tend to have more difficulty engaging with services, according to Hewings, although there are exceptions such as the Women's Institute.

Typically, about 5 percent of the population reports often or always feeling lonely, but that figure ticked up to 7 percent during COVID lockdowns

One approach is "social prescribing," in which clinicians identify patients experiencing loneliness and refer them to local community groups and activities. The United Kingdom has been able to embrace this strategy—promising to roll it out nationwide by 2023—in part because a robust set of non-profit organizations are offering supportive services around the country.

One of the longest-standing efforts to directly address loneliness is that of the Cares Family, whose national organization and five city-based branches have connected tens of thousands of younger and older neighbors to share time together. According to the organization's internal metrics, 73 percent of older participants say the program reduces their isolation and 86 percent are better able to appreciate the changing world because of it.

Founder Alex Smith is no stranger to loneliness.

"I have experienced from a personal perspective—both during COVID and before—the insidiousness of isolation and how it can lead to feelings of addiction and loss and mourning and even anger with the world," he said.

In March 2020 the organization had to suspend many of its in-person operations but, forced by necessity to experiment, it created new online, phone, and postal mail programs to provide remote support. Although the new programs weren't a suitable substitute for everyone, Smith said they enabled some people to participate who hadn't been able to before the pandemic, for example, due to the inability to attend in person. The online program even earned a shout-out from Barack Obama.

Another organization with a slightly different model is Linking Lives, which helps churches and other Christian organizations connect people in their community to “befriending” schemes. The organization adapted to lockdowns by launching a remote program, "Two's Company," which allowed clients to stay connected by telephone. The new telephone befriending model yielded more than 1,000 new referrals in the first year.

Jeremy Sharpe, the organization's national director, participates in a befriending scheme in his own community, making weekly visits to an older man who lives near him. Unlike caregivers who stop by daily to help the man get dressed and eat, Sharpe spends more time there forging a real connection. "He does always look forward to my visits, including a bit more time with him," said Sharpe. The connection became even more important when the man's elderly wife died of COVID. But Sharpe stressed that Linking Lives was just one piece of the puzzle.

"Befriending isn't going to solve someone's situation of loneliness by itself," he said.

Indeed, Hewings stresses that diverse interventions are complimentary and can be interdependent. For example, she praised London's Southwark program Elephant Says Hi!, which has initiated events and established norms to make their neighborhood more welcoming, but pointed out that people can only engage with local amenities if there are safe streets to get to them.

"Befriending isn't going to solve someone's situation of loneliness by itself"

"It's not that much help if you've got a brilliant service to find people and support them, but there's no buses for them to get to anything, or there's nothing for them to do because there's no funding for community groups," said Hewings.

As people and governments accustom to living in a world with COVID-19, they are resuming old routines, but organizations and scientists whose work on loneliness preceded the pandemic hope that new attention to the issue will not fade.

Hewings acknowledged that attention had been largely centered on the United Kingdom and the United States, but other parts of the world are turning their attention to the issue, too. In February 2021, Japan designated its own Minister of Loneliness to alleviate social isolation. In March 2021 the Aspen Institute published a report describing loneliness in India. And attendees at the upcoming conference include researchers working in Brazil, Zimbabwe, and Tanzania.