Go to homepage
Health Security and the COVID-19 Pandemic: Health and Security for Whom?
Governance

Health Security and the COVID-19 Pandemic: Health and Security for Whom? 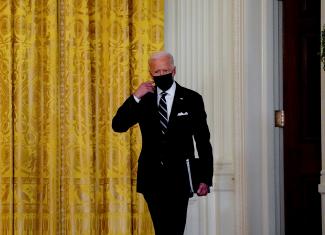 U.S. President Joe Biden removes his face mask as he arrives to deliver remarks on the COVID response and vaccination program at the White House, in Washington, DC, on August 18, 2021. REUTERS/Elizabeth Frantz
by Celia Almeida August 19, 2021

The concept of "health security": has long been prominent and controversial in global efforts to protect health. Paradoxically, the COVID-19 pandemic has provided evidence of this concept's failure and reignited interest in it for the post-pandemic world. The past shortcomings and present interest highlight the continued failure to address political and economic structural problems that generate inequities and produce neither health nor security for most of the world’s population. Thinking beyond the pandemic, policymakers should reject health security and center policy on promoting human solidarity and protecting the human right to life.

A Brief History of Health Security

As a concept, health security arose after the Cold War. Many factors contributed to this development, but the public health community played a prominent role in the process by intending to mobilize political attention and economic resources for global health. In a new confluence of ideas, foreign policy and security communities began to "securitize"  transnational health events, such as pandemics. The security framing provided a way to understand complex challenges, produced a narrative about how to address them, and set priorities for national and international action. However, the focus on security broke with strategies prominent during the 1970s that had emphasized universal access to primary health care based on the right to health, such as the Global Strategy for Health for All by the Year 2000.

In the 1990s, Western-dominated multilateralism facilitated an upsurge in the global health involvement of international economic and financial institutions, which challenged the traditional primacy of the World Health Organization (WHO) and supported the "securitization" of strategies to address health threats. The foreign policy and national security interests of high-income states, especially the United States, helped stimulate significant growth in voluntary contributions to the WHO's budget and a proliferation of public-private partnerships on global health issues. These developments eroded the WHO's leadership role and gave high-income countries more control over resources supposedly allocated for advancing global health, as well as more influence over the resulting initiatives.

In addition, the growing financial, political, and ideological presence of the World Bank and International Monetary Fund affected the health sector through, among other things, structural adjustment and austerity programs. These imposed conditions on social spending, which particularly constrained publicly financed health systems. Creation of the World Trade Organization (WTO) in 1995 increased the power of multinational corporations based in high-income countries by opening markets and protecting intellectual property rights. In these ways, powerful countries and companies harnessed health security to their own interests.

Health security also influenced policymakers' justifications for increased political and financial commitments on epidemic and pandemic diseases. For example, the approach to HIV/AIDS transitioned from the human rights strategy of the 1980s to treating the pandemic as a security threat in the 1990s. This change sparked a controversy over equitable access to antiretroviral drugs, largely resolved by foreign aid and special programs from high-income countries—such as the U.S. President's Emergency Plan for AIDS Relief—which increased access without compromising intellectual property rights.

Similarly, the WHO's review of the International Health Regulations (IHR) reinforced treating serious disease events as security threats. The revised IHR intended to empower the WHO to use non-governmental information in surveillance and to declare public health emergencies of international concern (PHEICs). Ostensibly, these powers would create global public goods: better surveillance and early warnings. In practice, the changes mainly benefited high-income countries, which could use the information to protect themselves. By contrast, the IHR did not require high-income countries to provide financial and technological resources to middle- and low-income states nor reduce the adverse impact that intellectual property rights might have on responses to PHEICs.

Although incomplete, this brief account of health security before COVID-19 highlights how the concept supported a particular kind of collective action on global health. However, security thinking largely served the geopolitical and commercial interests of high-income countries and provided little policy scope or funding for addressing the health problems faced daily by some middle-income and all low-income countries.

Many national responses to COVID-19 ignored multilateralism and its imperative of collective action. When confronted by an actual health and security crisis, countries in every region, especially high-income nations, repeatedly adopted nationalistic policies and were hostile or indifferent to collective action—despite the WHO's increasingly desperate appeals for cooperation and solidarity. Antagonism among countries, mainly between the United States and China, paralyzed the decision-making process of the UN Security Council, which failed to respond in any satisfactory way to the devastating pandemic. Tensions flared in the WTO, where high-income countries are defending their vaccine producers’ intellectual property rights, even when those producers have benefited from substantial public funding. Even those cooperative mechanisms that have been built by the WHO and other entities to combat the pandemic, such as the COVID-19 Technology Access Pool (C-TAP) and the Access to COVID-19 Tools Accelerator (ACT-A), have encountered great difficulty. The C-TAP never became effective, and the ACT-A is struggling to advance equitable vaccine access.

The lack of international cooperation hurt national efforts to manage the economic and social consequences of public health interventions, address failing hospital systems, and provide medical supplies (e.g., respirators and masks) and public goods, particularly vaccines. As a result, treatment of patients with chronic diseases or other health conditions was postponed, and an enormous part of the world was left without vaccines. Cascading public health, economic, social, and individual crises around the world have magnified and aggravated the inequalities that plagued humanity before COVID-19.

Unfortunately, the COVID-19 catastrophe has renewed interest in framing pandemics and epidemics as security threats

Beyond the Pandemic and Health Security

Unfortunately, the COVID-19 catastrophe has renewed interest in framing pandemics and epidemics as security threats without much serious reflection on how and why health security failed as a concept and strategy before and during this pandemic. The recently released report of the G20 High Level Independent Panel on Financing the Global Commons for Pandemic Preparedness and Response provides an example. It makes ample use of securitization concepts—health security, global health security, pandemic security, and human security—but never uses the word "solidarity" or refers to "human rights." Its reform proposals strengthen the power of high-income countries, the role of international financial and economic institutions, and the influence of corporations and philanthropies largely located in high-income countries. To quote Giuseppe Tomasi di Lampedusa's The Leopard, "everything must change if everything is to remain the same."

Before COVID-19, worries about, or opposition to, health security often appeared in proposals for new treaties that would, according to advocates, re-conceptualize health security or anchor global health in principles and approaches focused on reducing inequalities, improving social determinants of health, and protecting human rights in support of more equitable health outcomes. This pattern has reappeared in proposals for a pandemic treaty that many advocates believe should include provisions to improve equity in global health. However, relying on treaty law to overcome submission to, and dependence on, the world system and the global health hegemony of high-income countries is a questionable strategy. We need to change the terms of the debate.

Any alternative to the health security approach should seek to restore respect for nature, protect human rights, mitigate global health inequities, and achieve better conditions of life for the most vulnerable. In a world characterized by power asymmetries, achieving these objectives means confronting the structural factors that determine who is entitled to what, and at what price. This task requires making structural changes that support equitable participation in global health governance. The global health policy community can pursue these changes by exploiting the geopolitical dynamic as an opportunity to surmount governance institutions and arrangements dominated by the power and values of Western hegemonic states.

We urgently need to rebuild credence in solidarity in public life and social relations. This mission requires states and international organizations, together with a myriad of national and international actors, to engage in a truly democratic dialogue. We cannot continue to subject most of the world’s health to the security needs of high-income countries and private-sector interests in maximizing profits. There are better ways to govern global health. Otherwise, if global health governance does not confront these factors in the wake of COVID-19, we will surely continue to sow plagues and count the dead.