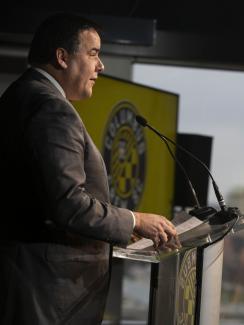 Columbus, Ohio, Mayor Andrew Ginther has placed racial disparities at the center of his administration. First as a city council president and then as mayor, he drew attention to differences in infant mortality between Black and white residents, and in June of 2020, he pushed the city council to declare racism a public health crisis—following in the footsteps of Milwaukee a year earlier.

At the same time, Columbus's low-income residents continue to endure harsh conditions and stark inequities. In a bleak milestone, the city counted two hundred homicides in 2021, the most in its history. About half of tenants are rent overburdened—and Black residents bear the brunt of these crises.

Ginther spoke with Think Global Health about the importance of acknowledging long-standing racial disparities and the challenging road to close them.

My administration is really trying to look at the social determinants of health, as opposed to just health care or health systems

Think Global Health: Above and beyond the COVID-19 pandemic, when you think about the health and well-being of the people in Columbus, what are your top priorities?

Andrew Ginther: There are a number of issues. Take a look at infant mortality. Black babies are dying before their first birthday at 2.5-times the rate [PDF] of white babies. Our public health commissioner, Mysheika Roberts, often says that the driving forces behind infant mortality are these social determinants of health and well-being of the mother while she is pregnant. So, my administration is really trying to look at the social determinants of health, as opposed to just health care or health systems—including transit, employment, food insecurity, and other things in our neighborhoods that contribute.

Another issue my administration is  looking at through the lens of public health is gun violence. Last year the United States saw the greatest increase in gun violence in sixty years, and midsize cities have seen some of the most dramatic increases—so the Columbuses, the Nashvilles, the Indianapolises, not just Chicago and Los Angeles. Housing insecurity has also created some huge disparities in our community.

Think Global Health: Racism has been built into the structure of this country for a long time, some would argue since before its inception. Acknowledging it is important, but it's another thing to combat it.

Andrew Ginther: You're absolutely right—but I don't want to skip that part. There are still a number of Americans, and people that live in this city, who don't acknowledge that systemic racism exists in the United States. And it's very challenging in a community or in a country to move forward and deal with a public health crisis like racism if not everyone agrees it exists.

My administration has tried to follow the data, and to listen specifically to our communities of color in a way that we haven't before, to find out what we need to be doing differently to better serve them. It guides what we've called our Equity Agenda—and equity is not equality. We are going to be purposeful and intentional about investing in neighborhoods and neighbors who aren't sharing in Columbus' success. The city has been able to reduce Black infant mortality by 23 percent, making significant headway.

Think Global Health: What changes in processes within government itself are necessary to pivot and address racism?

Andrew Ginther: One of the things I started back when I was city council president that we continued is the effort of CelebrateOne, which is our community's public-private partnership [to reduce infant mortality]. I still remember one of the first times reporting some of the findings of our initial work, and I put up a map of where the highest incidence of infant mortality was taking place. And then I overlaid the map with the highest increases of violence, the poorest performing schools, the highest rates of evictions, lower life expectancies—and it started clicking how racism had impacted all these other things that the administration was working on. And unless my colleagues and I were going to look through that equity lens—whether we were in charge of police and fire; or refuse and recycling; or sanitation; or clean water, sidewalks, and infrastructure —we weren't going to address some of these larger systemic problems. So, it’s having everyone own this agenda, and understanding our roles in helping to address it, and holding ourselves accountable for it.

Think Global Health: You brought up violence as one of your priorities. Your police and community partners are engaging in group violence intervention (GVI), a strategy with a lot of evidence to support it, but some advocates feel the process is moving too slow. Are you moving fast enough, given the historically high rate of homicides last year?

Andrew Ginther: It's never happening fast enough. This is the first time we're doing GVI in Columbus, and we've had to find the right faith leaders and congregations to work with our administration, to make sure that it's successful. We're going to keep our foot on the gas, but we want to be thoughtful and purposeful and intentional to make sure it's right. We are going to launch on March 1 of this year.

I've hired the first chief of police from outside the division in its history, and we've put in place a civilian review board and just hired the city's first inspector general. Our chief of police and her assistant chief who came from Detroit have pretty extensive experience with GVI, so we're hopeful that's going to help this become even more impactful and successful.

We're also doing a number of other interventions—pilot programs involving trauma surgeons and ER docs doing interventions with folks literally while they are in our emergency rooms—and one of the largest chunks of our Rescue Plan dollars, thus far, we put into programming and employment for young people.

Unless my colleagues and I were going to look through that equity lens, we weren't going to address some of these larger systemic problems

Think Global Health: So much depends on trust between the police and the community. What are some of the ambitious things you would think about doing to rebuild that relationship?

Andrew Ginther: We're changing the actual job descriptions of our police officers. We have dramatically increased the amount of de-escalation training and community immersion for officers while they're training in the academy.  There will be some earlier interventions with officers who have some troubling or concerning types of behaviors or who are receiving complaints, to help those officers get the help they need to bring their very best selves to work and correct things early before they escalate.

And we've been talking about a civilian review board in Columbus for forty years. Putting that charter amendment on the ballot in 2020 and getting 75 percent of the voters to support it gave me a great deal of power when I sat down with the Fraternal Order of Police to negotiate probably the most progressive contract in the city's history. Not everything we wanted, not nearly enough, but some significant changes.

Think Global Health: Some advocates have pressed for a reconciliation-type process, to examine and right past wrongs. How do you view that?

Andrew Ginther: There are folks I've talked to that have been involved with reconciliation projects around the country and in some cases the world, and we’re very much considering that as part of our longer-term reform efforts here.

Think Global Health: You've mentioned housing as another priority. What share of Rescue Plan funding are you thinking about putting into affordable housing?

Andrew Ginther: We're contemplating anything and everything.

I won't bore you with all the details, but in Ohio cities are funded by income tax revenue—only 1 percent of municipalities in the country are funded this way, I guess we're all in Ohio—and you pay income tax in Ohio where you work, not where you live. So income tax accounts for 80 percent of our general fund budget for cops, firefighters, recreation and parks, health. . . . With the advent of remote work, there's a great deal of uncertainty about the future of this funding, so we've been very reluctant to commit those Rescue Plan dollars until we have a better sense.

We've taken a different approach. In 2019, for the first time, the city did a bond issue dedicating $50 million for housing. That money will be spent through the end of this year. The goal is to put at least another $150 million issue on the ballot this fall. And I am going to challenge the region to raise and invest $1 billion over the next 15 years and double the number of units coming to market every year in the region. It's ambitious, but I think very doable. But it's going to take all the region. Columbus can't solve this problem alone; we need our suburban neighbors and suburban counties to step up and do their part, too.

Andrew Ginther: Certainly, public health has never been more important than it is now. Public health was not the top priority of most municipal, state, or federal leaders until the pandemic.

I think it makes so much sense for those who want to have dynamic and inclusive growth, and have more people sharing in prosperity, that that would extend to health—looking at the social determinants of health, looking at life expectancy, looking at quality of life, looking at the environmental health of our neighbors and neighborhoods.

But it resonates with people in a way differently today than maybe ever before because people are focused on the health of their family, their neighborhood, their city, and want to build a community where there can be a common, higher standard around everything from quality of life to life expectancy, birth outcomes, kindergarten readiness, and access to safe and affordable housing. I think public health in some respects reflects having a basic standard of living that everyone wants to see their neighbors realize.