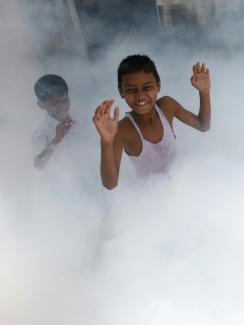 Children play as a health worker fumigates a residential area, where cases of malaria were reported, in Mumbai, India on March 20, 2009. REUTERS/Arko Datta
by Winnie Mpanju-Shumbusho and Robert D. Newman April 8, 2021

The parasite that causes malaria and the virus that causes COVID-19 could hardly be more different — but beating them will require common investments. Causing over 200 million cases and 400,000 deaths annually, malaria is an ongoing health security crisis that provides important lessons for what it takes to prevent, detect, and respond to pandemics.

Still endemic in nearly half of the world, malaria has thrived where there are gaps in basic health services. Its presence also masks outbreaks of other diseases: when fragile health systems are overburdened by the need to diagnose and treat malaria, they can miss new infectious threats before they can be contained. And consider that each month, disease detectives around the world investigate as many as 7,000 potential disease threats, each posing the possibility of becoming a global threat such as Ebola, Zika or COVID-19. As the world is more interconnected, these threats are increasing in frequency and severity, and the next pandemic threat is likely already out there.

The next pandemic threat is likely already out there

COVID-19 brought into sharp focus the importance of equitable and resilient health systems, and there is a common understanding of the need to ensure access to routine health care and minimize the impact of a disease outbreak on emergency room care. Yet, without substantial new investment in preventing, diagnosing and treating disease around the world, billions of people will continue to live with slow-burning health threats such as malaria in parallel with increasing global vulnerability to emerging infectious diseases.

In places where zoonotic spill-overs are a fact of life, one crucial step we can take is to invest in community health worker (CHW) capacity to detect and treat febrile illnesses. With basic training, these health workers offer frontline triage capabilities directly in communities or homes. Using a rapid diagnostic tool smaller than a credit card, they can quickly and accurately determine if someone's fever is due to malaria, and if so, administer medicine to stop the parasite in its tracks. This reduces the potential for transmission to other family and community members, the need for advanced medical care and, the risk of death. They can also diagnose and treat diarrhea and pneumonia, and determine if medical care is needed. In sub-Saharan Africa, where children under five often suffer half a dozen cases of fever annually, this is a simple but life-saving game-changer. And it may also allow us to catch that next outbreak before it becomes a pandemic.

The history of malaria control shows what is possible. Over the last twenty years —in part thanks to investments in recruiting and training CHWs — the world has nearly halved incidence of the disease. Herculean efforts and investments from affected countries, and catalytic investments from partners including the United States, the United Kingdom, and the Global Fund to Fight AIDS, Tuberculosis and Malaria have saved an estimated 7.6 million lives and averted 1.5 billion cases.

Many innovations from the fight against malaria have been deployed against the current COVID-19 pandemic. For example,  with support from the U.S. President's Malaria Initiative, Madagascar's  National Malaria Control Program helped establish a nationwide Fever Sentinel Surveillance Network. With the touch of a few buttons on a mobile phone, community health workers send updates about malaria tests conducted in their villages, as well as suspected outbreaks of dengue, influenza, SARS-CoV-2 and other fevers. Much like we have seen with the daily COVID-19 case tracking, the reports enable the program to keep track of where upticks in disease are happening and medical resources to be deployed, as needed.  Systems established for malaria are also being used in this way for pandemic prevention in Mozambique, Rwanda, Uganda and elsewhere.

Globally, governments and donors distribute 267 million rapid malaria tests annually, tests that make it possible to differentially diagnose malaria from other disease outbreaks. But these cases do not diagnose themselves: it takes a vast number of CHWs to administer malaria tests and medicines within the 24-hour window recommended for treating fevers and prevent the need for more serious medical care. CHWs report back to a country's central health information system to track disease spread and improve the availability of medicines and diagnostics. These health workers, who are the eyes and ears on the ground, are the frontline force responsible for preventing, detecting and responding to malaria, pneumonia, diarrhea, and other outbreaks. They also are the rapidly available troops when crisis hits.

In West Africa during 2014, these health workers were able to rapidly pivot to respond to the Ebola outbreak. CHWs were uniquely positioned to educate communities about healthy behaviors such as safe burial practices and sanitation, to spot symptoms, and to conduct contract tracing and surveillance. Similarly, millions of frontline workers have been deployed to control the COVID-19 pandemic. In Rwanda, CHWs were given additional training to support surveillance and provide health education.

Health systems that allow transmission of malaria are less likely to be able to prevent other outbreaks. Of the estimated 215 million malaria cases in sub-Saharan Africa annually, only 63 percent seek care, and of those only 37 percent are documented by surveillance systems. Where so many cases of febrile illness go untested, unreported and untreated, the entire world is at risk. To quote the title of a recent report, we should Leave No Fever Unresolved.

Investments in strengthening fragile health systems that fortify countries' frontline malaria capacity can be leveraged effectively to respond to COVID-19. Continuing and even increasing these investments would send a message that ending diseases like malaria, ensuring universal access to primary care services, and preventing the next pandemic are all part of the same opportunity.

This pandemic has reaffirmed what the world learned from Ebola: during an emergency, rather than scramble to establish new systems, governments are far better off mobilizing systems they have already invested in, with personnel who have trained to respond. By scaling up recruitment and training, global investments in malaria prevention, control and treatment have contributed to the goal – and benefits – of having a community health worker in every village.

Preparedness is a choice. Our future health security will be defined by the decisions global leaders make in the coming months. This must include a renewed global commitment to ensure access to quality community health services for everyone, everywhere.

Winnie Mpanju-Shumbusho MD; MPH; M.MED previously served as assistant director general at the World Health Organization and as co-chair of the Lancet Commission on malaria eradication.